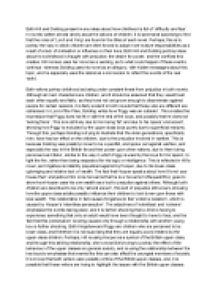 Childhood is portrayed as being full of difficulty and fear. How do the writers of Lord of the Flies and I'm the King of the Castle present this?

Transfer-Encoding: chunked ﻿Both Hill and Golding present many ideas about how childhood is full of ?difficulty and fear?. In novels written almost wholly about the actions of children, it is somewhat surprising to find that the roles of ?Lord? and ?King? are found in the titles of each novel. Perhaps, this is to portray the way in which children are often forced to adopt more mature responsibilities as a result of a lack of civilisation or influence on their lives. Both Hill and Golding portray ideas about how childhood is fraught with prejudice, the desire for power, and the conflicts this creates. Hill moreso uses her novel as a warning, as to what could happen if these events continue, whereas Golding uses his novel as an allegory, with hidden messages about this topic, and he especially uses the island as a microcosm to reflect the events of the real world. Both writers portray childhood as being under constant threat from prejudice in both novels. Although all main characters are children, and it should be assumed that they would treat each other equally and fairly, as they have not yet grown enough to discriminate against people for certain reasons, it is fairly evident in both novels that those who are different are ostracised. In Lord of the Flies, Golding writes how ?Piggy was an outsider?. This creates the impression that Piggy does not fit in with the rest of the boys, and possibly that he does not ?belong there?. ...read more.

However, it is this desire for power that leads to the splitting of the boys into the two factions, and so, it is evident that these desires for power have significant effects, even among children. Furthermore, the boys are said to be in ?awe at the power set free below them?. This phrase shows how the boys on island are amazed by the possibilities of their newly found freedom, and the fact that ey are ?in awe? suggests that they are experiencing something that they have not witnessed before, showing how before, they were were possibly deprived of power, and now, because they have witnessed the possibilities of power, they desire it. Possibly, Golding is trying to portray how children have learnt to desire power from their fathers, or other masculine influences. This is reflected in Hill?s novel, as Hooper is seen to say ?you do what I say? and ?when my father dies, this house will be mine?. From this, we can see that Hooper is clearly portrayed as desiring power, and it is evident that his desire for power has in fact become so strong that he has lost all familial emotion or sentiment. This suggests that Hooper has become ?depersonalised? but this desire for power, and this links to the descent into savagery that occurs in Lord of the Flies, when the desire for power is so lustful and desperate that, in the absence of civilisation, the inner beast comes out. ...read more.

In this way, Hooper is portrayed to utilise his wealth, to seed a conflict between himself and Kingshaw, whereas in reality, it was completely unnecessary. Perhaps, through this, Hooper is trying to showcase how the upper-classes go to unnecessary lengths to distance themselves from those who they perceive to be ?inferior? due to their wealth, and this is possibly used to showcase the negative aspects of the British upper classes. The conflict is further seen at Leydell Castle, when Kingshaw asks Hooper to ?take his hands off the wall?, and although the intent was unknown, it is possible that Kingshaw wanted to use his position of physical power to cause physical harm to Hooper, to conflict the way in which Hooper used his power from his wealth and class to cause emotional harm to Kingshaw. Perhaps, Hill is trying to illustrate the need for a backlash against the upper class, and is maybe trying to suggest that the upper class? position of wealth can be combatted. Again however, this is a conflict between children, and it is shocking that children who are only ?almost eleven? are involved in this. Hill and Golding both use their novels to illustrate the ways in which childhood is full of ?difficulty and fear?, due to the conflicts that occur. Overall, both authors target conventional views that childhood is easy and laid-back by presenting these ideas of how childhood is full of ?difficulty and fear? by exploring the consequences when children are forced to deal with issues that normally only adults would have to face. ...read more.