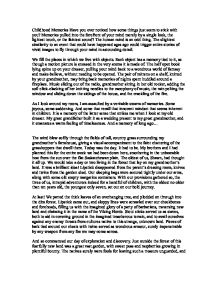 Childhood Memories Have you ever noticed how some things just seem to stick with you? Memories pulled into the forefront of your mind merely by a single look, the lightest touch, or the faintest sound? The human mind is an odd thing. The slightest similarity to an event that could have happened ages ago could trigger entire stories of vivid images to fly through your mind in astounding detail. We fill the places in which we live with objects. Each object has a memory tied to it, as though a motion picture is encased in the very atoms it is made of. The half open book lying spine up on your dresser, pulling your mind back to a wondrous world of fantasy and make-believe, without needing to be opened. The pair of mittens on a shelf, knitted by your grandmother, may bring back memories of nights spent huddled around a fireplace. Music sliding out of the radio, grandmother sitting in her old rocker, adding the soft click-clacking of her knitting needles to the cacophony of music, the rain pelting the window and sliding down the sidings of the house, and the crackling of the fire. ...read more.

It was a brilliant idea! Lipstick disappeared from the parent's dressing room, knives and twine from the garden shed. Our sleeping bags were secured tightly under our arms, along with some old empty margarine containers. With our provisions gathered so, the three of us, intrepid adventurers indeed for a handful of children, with the oldest no older than ten years old, the youngest only seven, set out on our bold journey. At last! We parted the thick leaves of an overhanging tree, and plodded on through into the dim forest. Lipstick came out, and sloppy lines were scrawled over our cheekbones and foreheads, filling us with the imagined glory of a party of barbarians, traversing new land and claiming it in the name of the Viking Horde. Stout sticks served us as staves, both to aid in covering ground in the imagined treacherous terrain, and to avail ourselves against any enemy threats from cultures native to this strange, unknown land. Pieces of bark tied around our chests with twine served as wondrous armour, surely impenetrable by any weapon from any foe we may come across. ...read more.

Unrolled sleeping bags served as a roof over our heads, supported by the four posters which seemed to climb halfway to the heavens, to the eyes of a young child. But by the time this great construction was completed by our valiant explorers, the raspberry stores had run out, and the sweet peas had been lost in the long trek to the fort. Shamed, with their bellies aching, the Viking horde surrendered to the might of the land, and plodded back out of the forest. Stout sticks were cast to the ground, perhaps to be found by some other adventurers in years to come. The hose coiled by the side of the house washed off the grime of their journey, and the savage markings on their face. Hands combed cobwebs from their hair, and twigs from their clothes. Our heroes were defeated, and, walking into the house with a downcast expression, the day came to an end. And so you can see, that an object can hold an entire story, sometimes having nothing to do with the object in question. And childhood illusions of grandeur can awaken the imagination to such extents, as to bewilder adult spectators. ...read more.