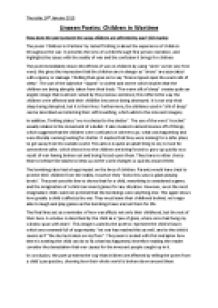 &quot;Children in Wartime&quot;: How does Isobel Thrilling present the ways children are affected by war? (18 marks)

Transfer-Encoding: chunked ﻿Thursday 14th January 2015 Unseen Poetry: Children in Wartime How does the poet present the ways children are affected by war? (18 marks) The poem ?Children in Wartime? by Isobel Thrilling is about the experience of children throughout the war. It presents the view of a child through first person narration, and highlights the issues with the reality of war and the confusion it brings for children. The poet immediately shows the effects of war on children by using ?siren? as her very first word; this gives the impression that the children are in danger as ?sirens? are associated with urgency or damage. Thrilling then goes on to say ?Sirens ripped open the warm silk of sleep?. ...read more.

The use of the word ?ricochet? usually relates to the movement of a bullet. It also means to almost bounce off of things, which suggests that the children were confused on where to go, what was happening and were literally running looking for shelter. It implies that they were looking for a safer place to get away from the outside world. This action is quite an adult thing to do; to look for somewhere safer, which shows how the children are being forced to grow up quickly as a result of war having broken out and being forced upon them. They have no other choice than to behave like adults to keep up as the world changes so quickly around them. ...read more.

The final lines act as a reminder of how war affects not only their childhood, but the rest of their lives. A window is described by the child as a ?jaw of glass, where once had hung my window spun with stars?. This image is used by the poet to represent the child?s future, which once seemed full of opportunity. Yet war has reached this as well, and to the child it seems as if ?the sky lay broken on my floor?. The poem is ended with this metaphor how there is nothing the child can do to fix what has happened, therefore making the reader consider the devastation that war causes for the innocent people caught up in it. In conclusion, the poet presents the way that children are affected by telling the poem from a child?s perspective, showing how their whole world is broken down around them. ...read more.