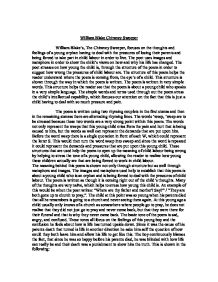 William Blake Chimney Sweeper William Blake's, The Chimney Sweeper, focuses on the thoughts and feelings of a young orphan having to deal with the pressures of losing their parents and being forced to take part in child labour in order to live. The poet uses images and metaphors in order to show the child's views on how and why his life has changed. The poet stresses on how young the child is, through the structure of the poem in order to suggest how wrong the pressures of child labour are. The structure of this poem helps the reader understand where the poem is coming from, the eye's of a child. This structure is shown through the way in which the poem is written. The poem is written in very simple words. This structure helps the reader see that the poem is about a young child who speaks in a very simple language. The simple words and terms used through out the poem stress the child's intellectual capability, which focuses our attention on the fact that this is just a child having to deal with so much pressure and pain. ...read more.

The child at this point was so young when his parents died that all he remembers is going to a church and never seeing them again. At this young age a child usually only knows of a church as somewhere where people go to pray, he does not realize that they did not just go to pray and never come back, but that they were there for their funeral and that is why they never came back. The basic tone of the poem is sad, angry, and confused. These tones all focus on the feelings of this young boy and the confusion he feels about how is life has turned upside down. Since it was the cause of his parents death that turned is life in another direction he asks him self the question of how could they both leave him and allow his life to get like this. The boy continuously blames the fact, that since he was so happy before his parents died, he was blinded with how life can really be and their death was a punishment to show him the truth. ...read more.

Images and Metaphors are used throughout the poem viewing a child's new life and new feelings. The structure of the poem is written as though it is coming straight out of the child's head, dark and miserable for the new life that he has stumbled into is nothing but a "...heaven of our misery". Comparing both "The Chimney sweeper" from songs of innocence and songs of experience, the poems are both similar in subject with Blake using `The Chimney Sweep" in both to emphasise the miserable urban life of a chimney sweep during the industrial revolution. Appearing in both poems is the rhyming pattern of 'weep, 'weep and four beat line rhythms producing the effect of a children's song, this is a technique used to accentuate innocence of the poem. The two poems are also similar that in which are being told from a child's point of view display one important difference. In the `innocence' poem the child is unaware of the implications that the story he is telling beholds. Where as in "experience" the child is a streetwise child of the slums creating a darker tone. In both `innocence' and `experience' we can see the contrast of each revealing the story of a chimney sweep. ...read more.