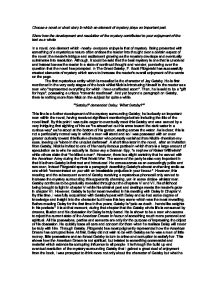 Choose a novel or short story in which an element of mystery plays an important part.

Choose a novel or short story in which an element of mystery plays an important part. Show how the development and resolution of the mystery contributed to your enjoyment of the text as a whole In a novel, one element which -nearly- everyone enjoys is that of mystery. Being presented with something of a mysterious nature often entices the reader into thought over a certain aspect of the novel; the reader's intrigue and excitement growing as the mystery develops and eventually culminates into resolution. Although, it could be said that the best mystery is one that is unsolved and instead leaves the reader in a state of continual thought and wonder, pondering over the question that the novel has prompted. In The Great Gatsby, F. Scott Fitzgerald has successfully created elements of mystery which serve to increase the reader's overall enjoyment of the words on the page. The first mysterious entity which is revealled is the character of Jay Gatsby. He is first mentioned in the very early stages of the book whilst Nick is introducing himself to the reader as a man who "represented everything for which I have unaffected scorn". ...read more.

Gatsby continues to be gradually revealled throughout the chapters VI and VII, his childhood being brought to light in chapter VI while his criminal past and dealings meets the reader's gaze in chapter VII. However, Gatsby is by far most revealled in his meeting with Daisy in Chapter V. By this time, I was fully acquainted with Gatsby's past with Daisy and so had some degree of knowledge and insight into the character but it was this key scene which was the most revealling. Before meeting Daisy for the first time in five years, Gatsby is "pale as death...hands like weights in his pockets." It is at that moment, during that chapter that the Gatsby who's life is consumed by dreams, illusion and his obsession for Daisy is truly bared. He is shown to be a man who seems to reject the current state of the American Dream in favour of something much more personal and spiritual. All his posessions, parties and servants are only for the purpose of impressing the object of his obsession. He quickly loses all care and concern for them when he realises Daisy will never be truly with him. ...read more.

It is almost like Gatsby was an influence upon her which would stand a chance at dispelling the materialism within her. And yet, even five years prior to the events of the novel, she was already assimilated into the world of cars, clothes and large houses which prompted her to reject her chance at true happiness for a life of hidden emotions and an abusive, racist, adulterous husband. It was through this unsolved mystery that my enjoyment of the novel was most increased as I pondered and explored in a bemused fashion the various things which one may deduce from a single line and the events surrounding it. Clearly from the above, it is correct for me to say that the mystery which was placed by Fitzgerald in the novel has greatly contributed to my enjoyment, understanding and overall appeciation of the novel itself. The mystery included in the novel led to me exploring the character of Gatsby in greater detail, his dreams, illusions, hopes and his life as an apparent victim. The mystery prompted me to explore the themes of the novel and to think upon how they have affected the characters and also how the affect people today as we live in our material-obsessed world. ...read more.