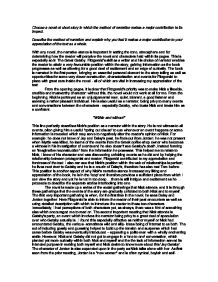 Choose a novel ot short story in which the method of narration makes a major contribution to its impact.

Choose a novel ot short story in which the method of narration makes a major contribution to its impact. Describe the method of narration and explain why you feel it makes a major contribution to your appreciation of the text as a whole. With any novel, the narrative stance is important in setting the tone, atmosphere and for determining how the reader will perceive the novel and characters held within its pages. This is especially so in The Great Gatsby. Fitzgerald's skill as a writer and his choice of narrator enables the reader to attain a very favourable position within the story, gaining information as the book progresses as well as allowing for a good deal of excitement and an edge of curiosity. The book is narrated in the first person, bringing an essential personal element to the story telling as well as opportunities for some very clever construction, characterisation and events for Fitzgerald to place with great care inside the novel - all of which are vital in increasing my appreciation of the text. From the opening pages, it is clear that Fitzgerald's priority was to make Nick a likeable, credible and trustworthy character: without this, the novel would not work at all for me. ...read more.

The act of including gossip and guessing helped to build up the tension and suspense which had came before Gatsby was eventually introduced - appearing a polite man with a wholly enchanting smile. However, Nick and Gatsby did not get to engage in a 'one to one' conversation, which planted yet more curiosity within both Nick and myself and the the lack of information served its intended purpose in making both myself and Nick desire to know more about this 'Jay Gatsby'. The character of Jordan is also expanded upon in the party as Nick talks alone with her. As first seen from the prior meeting, Jordan is a "new woman" and is often cynical, boyish and self-centered; she is described as beautiful yet also as dishonest, having cheated to victory in her first golf tournament as well as being fond of continually altering the truth. Through his skillful use of social encounters and information drizzled in tantalizing amounts, Fitzgerald compells me to appreciate the novel's intricacy yet more. Fitzgerald also includes a number of contrasting characters within the novel which further increase my liking and appreciation of the text, prompting me to look further into the way the characters have been formulated. ...read more.

Gatsby and Daisy's reunion begins amid pouring rain which perfectly symbolises the awkward and somewhat ominous nature of the meeting. Then their love is re-lit as the sun emerges, Daisy even dropping her veil of control and shedding a few tears. The later confrontation between Gatsby and Tom takes place under the burning sun on the hottest day of the year whereas Gatsby is killed by Wilson on the first day of autumn. Through including these techniques, Fitzgerald has urged me to look more closely at the techniques employed in the text, therefore serving to increase my overall appreciation of the novel. As is evident, the method in which a text is narrated is a vital ingredient when the author wishes for success. The Great Gatsby is made to stand out through this clever use of narrative and also the multitude of intricate additional features of the book which further serve to encourage the reader to look a little deeper into the text, uncovering even more features to look over. With this book, I have been compelled to dig in amongst the lines and pages, to examine more closely the literary techniques employed and have been rewarded with a much deeper understanding and stronger appreciation of both The Great Gatsby as a novel and Fitzgerald as a writer. ...read more.