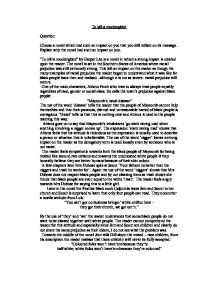 To kill a mockingbird Question: Choose a novel which had such an impact on you that you still reflect on its message. Explain why the novel had such an impact on you. "To kill a mockingbird" by Harper Lee is a novel in which a strong impact is created upon the reader. The novel is set in the Southern States of America where racial prejudice was still extremely strong. This left an impact on the reader as though the many examples of racial prejudice the reader began to understand what it was like for black people back then and realised -although it is not as severe- racial prejudice still occurs. One of the main characters, Atticus Finch who tries to always treat people equally regardless of race, gender or social class. He calls the town's prejudice against black people: "Maycomb's usual disease" The use of the word 'disease' tells the reader that the people of Maycomb cannot help themselves and that their paranoia, distrust and unreasonable hatred of black people is contagious. ...read more.

The reader feels angry towards Mrs Dubose for saying this to a little girl. Later in the novel the Finches black cook Calpurnia takes Jem and Scout to her church and Scout is surprised to learn that only four people can read. They encounter a hostile attitude from Lulu: "You ain't got no business bringin' white chillun here - they got their church, we got our'n." By the use of 'they' and 'we' the reader understands that some black people do not want to be classed together with white people. The reader cannot comprehend the reason for this attitude and especially since Jem and Scout are children and clearly do not share the same prejudice as their elders, I do not see what the problem was. Towards the middle of the novel Jem tells Dill about the mixed - race children, from his description the reader realises that these children will never be fully accepted: "Coloured folks won't have'em because they're half white; white folks won't have'em because they're coloured" The reader feels angry that the children are treated this way for something they had no control over. ...read more.

As a reader I feel great respect for Atticus as he knows that this move will probably make him unpopular and that Tom Robinson will still probably be found guilty. Throughout the trial it is obvious that Tom Robinson will be found guilty even though it is even more apparent that he is innocent, however, in the eyes of the white people he committed a worse sin, the sin of 'feeling sorry for her'. For a black man to feel sympathy towards a white woman is socially unacceptable. The reader feels angry as people are human no matter what colour their skin is. Even though Tom is found guilty Atticus is still positive as it took the jury an hour to consider the verdict and is comforted by Miss Maudie's word: 'a baby step has been taken along the road of tolerance' "To kill a mockingbird" by Harper Lee is a novel that leaves an impact on the reader as it is told through the eyes of a young girl Scout Finch as she grows up and the message is clear throughout the novel that white people are worth no more and no less than black people. ...read more.