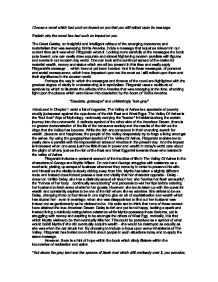 Choose a novel which had such an impact on you that you still reflect upon its message. Explain why the novel has had such an impact on you. The Great Gatsby, an insightful and intelligent critique of the emerging decadence and materialism that was sweeping 1920s America, holds a message that is just as relevant in our current time as it was when Fitzgerald wrote it. Looking more carefully at the messages the book puts foward, one can easily draw accurate and almost frightening modern parallels with figures and events in our modern day world. One can look at the continual spread of the desire for material wealth, money and status which are all too present in this time and easily apply Fitzgerald's message ... which has not yet been heeded. And it is these messages, of personal and social consequence, which have impacted upon me the most as I still reflect upon them and their significance in the modern world. Perhaps the way in which the messages and themes of the novel are highlighted with the greatest degree of clarity in understanding is in symbolism. Fitzgerald uses a multitude of symbols by which to illustrate the effects of the America that was emerging at the time, shedding light upon the places which were blown into desolation by the boom of 1920s America. ...read more.

However, she too is taken up with the quest for wealth and constantly aspires to be one of the rich whom she so admires. She strives to be as Daisy, changing three or four times in one night to give an air of sophistication and wealth which has eluded her - even in marriage, when she was disappointed to find out her husband was indeed not as gentlemanly as he claimed to be. It is quite sad to think that none of these women have attained the true American Dream: Daisy is rich and yet is not happy, lacking a spark and instead living a relatively extinguished existance while Myrtle posesses these features, yet is struggling with money and aspiring to be amongst the others of West Egg. Ironically, it is that which Myrtle wishes to be that eventually kills her. This could be perceived as a symbol of what would befall Myrtle if she did eventually acquire wealth - she would be destroyed as equally as she was when the car struck her. By choosing to include a focus upon some inhabitants of The Valley, Fitzgerald has invited me to think about people in such situations today and to apply the same message. ...read more.

In the novel, all of the main characters are originally from the Western side of America, past the Appalachians and amongst the midwestern plains and the northern states. The West coast, in the novel, represents those who have not yet been tainted by the unquenching desire for wealth which has been inflicted upon those in the East coast. Yet merely by going there, all of the once morally and spiritually driven Westerners have been turned to the life of hedonistic decadence and the pursuit of wealth. This again made me think of a modern parallel which, upon further thought, impacted upon me greatly. One could replace the East with the country of America, a place obsessed with the 'winner takes all' philsophy and immersed in materialistic gain, and the West with the United Kingdom. Throughout the years, the UK has become more and more American - perhaps we shall follow them into this also? Through reading this novel and applying modern parallels, it is clear that Fitzgerald's messages put foward in The Great Gatsby are chronologically universal. Apply them to any time in history and you shall see the importance and relevance of the themes in the novel and it is this ability to take the message from the 1920s and place it into our current time that has impacted upon me to the greatest degree. ...read more.