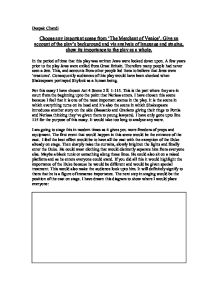 Choose any important scene from 'The Merchant of Venice'. Give an account of the play's background and via analysis of language and staging, show its importance to the play as a whole.

Deepak Chandi Choose any important scene from 'The Merchant of Venice'. Give an account of the play's background and via analysis of language and staging, show its importance to the play as a whole. In the period of time that this play was written Jews were looked down upon. A few years prior to the play Jews were exiled from Great Britain. Therefore many people had never seen a Jew. This, and accounts from other people led them to believe that Jews were 'creatures'. Consequently audiences of this play would have been shocked when Shakespeare portrayed Shylock as a human being. For this essay I have chosen Act 4 Scene 2 ll. 1-115. This is the part where they are in court from the beginning upto the point that Nerissa enters. I have chosen this scene because I feel that it is one of the most important scenes in the play. It is the scene in which everything turns on its head and it's also the scene in which Shakespeare introduces another story on the side (Bassanio and Gratiano giving their rings to Portia and Nerissa thinking they've given them to young lawyers). ...read more.

It will definitely signify to them that he is a figure of immense importance. The next step in staging would be the position of the cast on stage. I have drawn this diagram to show where I would place everyone: As you can see from my diagram the Duke is on a platform. This once again highlights the fact that the Duke is a figure of authority and importance. Shylock is isolated on one side of the courtroom on his own; this indicates that he has no support. Antonio on the other hand is also isolated but has behind him all his supporters. This would indicate that he is in trouble (isolation) but is within touching distance of 'innocence'. On l14 the Duke says: 'Go one and call the Jew into the court.' This highlights how the racial front fits into the play. The Duke doesn't say 'Call Shylock'. He uses the word Jew to refer to him. This suggests that Jews were just grouped and not treated as individuals. ...read more.

He could deliver these lines in a strong, confident and astringent manner. Antonio seems to be suffering from severe melancholy within this play. He shows this when he says: 'I pray you think you question the Jew. You may as well go stand upon the beach and bid the main flood bate his usual height.' This shows that he has already accepted his fate and given up. He is almost pleading for Bassanio to stop quarrelling with Shylock. He could deliver these lines in a very sombre mood, very softly. Shylock shows his supreme hate for Antonio by means of rejecting offers of three times the original amount of money. He even says: 'If every ducat...I would have my bond' by saying that he has told that he doesn't care about money. He only wants revenge. He is almost acting like an infant who is determined to get what he wants. Therefore he could deliver those lines very persistently. I enjoyed this play enormously. Mainly because of all the twists and loopholes involved in the story. I feel that seeing everything turning out well was quite impossible at one stage and Shakespeare still managed to find a way. This shows his absolute brilliance. ...read more.