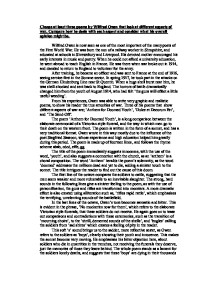 Choose at least three poems by Wilfred Owen that look at different aspects of war. Compare how he deals with each aspect and consider what his overall opinion might be.

Choose at least three poems by Wilfred Owen that look at different aspects of war. Compare how he deals with each aspect and consider what his overall opinion might be. Wilfred Owen is now seen as one of the most important of the many poets of the First World War. He was born the son of a railway worker in Shropshire, and educated at schools in Shrewsbury and Liverpool. His devoted mother encouraged his early interests in music and poetry. When he could not afford a university education, he went abroad to teach English in France. He was there when war broke out in 1914, and decided to return to England to volunteer for the army. After training, he became an officer and was sent to France at the end of 1916, seeing service first in the Somme sector. In spring 1917, he took part in the attacks on the German Hindenburg Line near St Quentin. When a huge shell burst near him, he was shell-shocked and sent back to England. The horrors of battle dramatically changed him from the youth of August 1914, who had felt 'the guns will effect a little useful weeding'. From his experiences, Owen was able to write very graphic and realistic poems, to show his reader the true atrocities of war. Three of his poems that show different aspects of war are; 'Anthem for Doomed Youth', 'Dulce et Decorum Est', and 'The Send-Off'. ...read more.

The second stanza illustrates another side of war. Owen demonstrates the sheer panic and confusion, which arises in dangerous situations, by telling the reader a horrific story in the present tense, of one soldier's death. The pace of the poem immediately quickens, with the phrase, 'Gas! Gas! Quick boys!' This abrupt line shocks the reader after the slow drawn out lines we have been used to. Owen goes on to describe the, 'ecstasy of fumbling', that occurs when, 'fitting the clumsy helmets'. The contrast of the words, 'ecstasy' and 'fumbling' evoke both the sharpness of fear and the clumsiness of exhaustion, enabling the reader to feel involved in the chaos and confusion. The fact that one soldier is not able to put on his gas mask, and chokes, 'drowning' in the 'green sea', gives an example of one man dying in a way that could not possibly be described as sweet and honourable. Owen goes on to deal with the aspect of death, which is vividly presented as the opposite of glorious, 'the white eyes writhing in his face', 'his hanging face, like devil's sick of sin'. He fills the poem with as many vile, ugly images as he can, along with his own feelings of anger and bitterness, to make the reader relive the agonising torture that this one soldier went through, not to mention the rest. An example of these vile, ugly images is the line that describes the dying soldier's condition, 'froth-corrupted lungs, obscene as cancer, bitter as the cud'. ...read more.

It consists of iambic pentameters, alternating with metrically irregular half- lines, achieving the stuttering effect of a train in motion, which is the basis of the poem. Also, unlike the other poems, Owen refers to the men as 'them', and 'they', implying that they are a commodity, not human beings. This aloof detachment to the soldiers arouses a deep sense of guilt and responsibility in the reader, and through the bitter tone that we receive at the end, we are encouraged to believe that the true principles of war have been completely lost. The poem Dulce et Decorum Est has a fast tempo, to keep the action 'alive' to the reader, and create a chaotic, confusing mood. This is due to the fact that that Dulce et Decorum Est deals with the aspect of war in the present, and Owen uses horrific, nightmarish imagery to apprehend the realism of war. He uses his personal response to contribute to the atmosphere, through an isolated third stanza of only two lines. This stanza is Owen's reaction to the soldier's death, who 'plunges' at Owen, 'in all his dreams', 'before his helpless sight', indicating a recurring nightmare, and sense of guilt, at his inability to help the soldier. Owen also uses direct speech in this poem, as he uses his own experience to narrate the story, therefore attacking the reality. In contrast, The Send-Off and Anthem for Doomed Youth both have a slow pace and solemn, detached view from Owen, to reflect the sadness, pain, anticipation, and sheer exhaustion of the soldiers. ...read more.