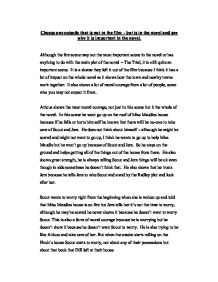 Choose one episode that is not in the film - but is in the novel and say why it is important in the novel.

Choose one episode that is not in the film - but is in the novel and say why it is important in the novel. Although the fire scene may not the most important scene in the novel or has anything to do with the main plot of the novel - The Trial, it is still quite an important scene. It is a shame they left it out of the film because I think it has a lot of impact on the whole novel as it shows how the town and nearby towns work together. It also shows a lot of moral courage from a lot of people, some who you may not expect it from. Atticus shows the most moral courage, not just in this scene but it the whole of the novel. In this scene he wont go up on the roof of Miss Maudies house because if he falls or hurts him self he knows that there will be no-one to take care of Scout and Jem. ...read more.

But when the smoke starts rolling on the Finch's house Scout starts to worry, not about any of their possessions but about that book that Dill left at their house. This in a way is also moral courage because she is nothing thinking about her self she is thinking about Dill and how upset he will be If his book is burnt. Also I think she wants the book because it reminds her of Dill. At one point someone puts a blanket over Scouts shoulders but neither Jem nor Scout realise until they get home. Atticus wonders where she got the blanket from, it all starts to fit in and they realise that Boo Radley puts the blanket over her shoulders. Atticus tells them to take it back to him but Jem refuses and says "Atticus, no sir!........Mr Nathan put cement in that tree, Atticus an' he did it to stop us findin' things - he's crazy, I reckon, like they say but Atticus I swear to God he ain't ever harmed us......" ...read more.

The whole of the fire scene not one black person is mentioned in helping out with the fire because black people did not live with the whites. While her house is burning down Miss Maudie remains very calm about the whole thing, although we never hear what she says or does throughout the fire but after she seems very calm and doesn't seem to mind that all her possessions are gone. All she cares about is that she is alive and well. So in that respect she shows great moral courage. In many ways the fire scene is very important scene in the novel, it shows a lot of things about the people of Maycombe and how they react. One thing it also shows is that the age gap between Jem and Scout showing more and more. Jem acts a lot more grown up than Scout in the way he looks after her, and tries to act like Atticus does. This scene shows the most moral courage in the novel and in many ways is the most important scene in my opinion. ...read more.