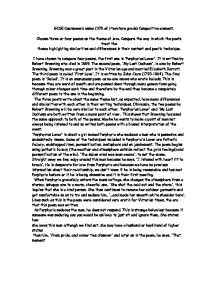 Choose three or four poems on the theme of love. Compare the way in which the poets treat the theme highlighting similarities and differences in their content and poetic technique.

GCSE Coursework essay (10% of literature grade) Comparitive element. Choose three or four poems on the theme of love. Compare the way in which the poets treat the theme highlighting similarities and differences in their content and poetic technique. I have chosen to compare four poems, the first one is 'Porphyrias Lover'. It is written by Robert Browning who died in 1889. The second poem, 'My Last Duchess', is also by Robert Browning. Browning was a great poet in the Victorian age and married Elizabeth Barratt. The third poem is called 'First Love'. It is written by John Clare (1793-1864). The final poem is 'Ballad'. It is an anonymous poem as no-one knows who wrote ballads. This is because they are word of mouth and are passed down through many generations going through minor changes each time and therefore by the end they become a completely different poem to the one in the beginning. The three poets write about the same theme but, as expected, have many differences and similarities with each other in their writing techniques. Obviously, the two poems by Robert Browning will be very similiar to each other. 'Porphyrias Lover' and 'My Last Duchess are both written from a mans point of view . This shows that Browning has used the same approach to both of the poems. Maybe he wants to make a point of men not always being listened to and so writes both poems with a biased interpretation of the event. 'Porphyrias Lover' is about a girl named Porphyria who seduces a man who is possesive and undoubtedly insane. Some of the techniques included in Porphyria's Lover are Pathetic Fallacy, endstopped lines, personification, metaphors and en jambement. The poem begins using pathetic fallacy (the weather and atmosphere outside reflect the girls feelings) and personification of the wind, 'The sullen wind was soon awake', to set the scene. ...read more.

The Lover is of low status and loves Porphyria and is very worried about her going to somone of higher status such as the Duke who loves himself only. From the poem, we have contracted information that tells us about the past lives of the poems. These bits of information lead us to believe that the Duke didnt feel any emotions for his former wife and as we can tell from the way the Lover acts at the end of Porphyrias Lover, he clearly doesnt feel the emotion of guilt. The Duke conjures up in his mind a conversation or even argument that would take place between him and his wife about her awful, un-snobbish behaviour towards life and how she disgusts him and has stepped over the line far too much, '...Or that in you disgusts me'. The Duke then says to himself, dont be so stupid, I would never stoop that low for anyone, 'E'en then would be some stooping; and I chose never to stoop'. This line reveals yet more of his self-centered character. The Duchess would flirt and smile for anyone, 'Whene'er I passed her; but who passed without much the same smile?' At this point in the poem, the Duke has quite clearly realised that he is definitely not the only source of his wife's enjoyment, 'This grew; I gave commands; Then all smiles stopped together', and simply has her killed. . Even at the beginning of the poem, we knew that the Duchess had died but not how or when. Now though, it is revealed that because the Duke became so obssesed with his own nature and how he though the Duchess should behave, we find he is the one who had her killed. Because the two were so unalike, they could not understand each other and he became fustrated that he couldn't control her. If we had known the Duke and Duchess from when they first met, I believe that we would have known that their marriage would end unhappily. ...read more.

This makes her already hard decision, even worse to make. The last stanza is a repeat of the fifth stanza (almost half way through), 'I wish, my child, thou'dst ne'er been born'. Because the stanza is repeated with minor changes, it emphasizes her unhappy wish to die and this time she is thinking of taking the baby with her, to become a suicidal murderer, although ambivalent. Another interpretation of the girls feelings is that she could be seeking attention because she is so lonely and upset and she says that she will commit suicide to get someone to notice her. The most overpowering emotion that this young girl feels is stress and depression. She cannot sort out her life and is thinking of suicide, which for such a young girl / single mother is an awful thought. My Favourite poem out of the four is 'Porphyrias Lover'. Some of the techniques included in 'Porphyrias Lover' are pathetic fallacy, endstopped lines, personification, metaphors and en jambement. I feel that the metaphors and personification bring life to the poem because they make the poem sound different instead of using tedious language and few clich�s. Pathetic fallacy really makes you believe that you are in one of the characters positions and that you understand exactly how they feel. En jambement gives a sense of disorder. It becomes too regular if only endstopped lines are used in the poem although it does control difficult explanations. The obvious difference between all the poems, is the structure and regular rhythm and rhyme patterns. Porphyria's Lover is constructed using alternate rhyming lines with roughly eight syllables to each line whereas My Last Duchess is written in rhyming couplets with ten syllables to each line. As these patterns are even, they create a sense of balance and control within the poem, especially if the lines are endstopped. If on the otherhand, there is en jambement present, the poem is still effective and probably even more so because it adds a bit of life and irregularity instead of the constant even beat. BY Katie Messmer 10N ...read more.