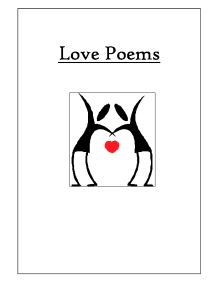 Choose three poems that deal with the idea of conflict and show how the writer has explored that conflict through content, language and form.

Love Poems Lucy Wade IIRW Choose three poems that deal with the idea of conflict and show how the writer has explored that conflict through content, language and form. The three poems I have chosen all deal with the idea of conflict but in different ways. Our love now and To his coy mistress are both persuasive poems. The conflict in the poem Rapunzelstilstkin is the relationship between the man and the woman; the woman in the poem is frustrated because the prince does not know what she wants. To understand the poem we have to go back to the fairy tales where the poem title has come from, these are Rapunzel and Rumpelstiltskin. Rapunzel is about a girl, Rapunzel, who was imprisoned in a tower by a wicked witch, and who used her ineradicably long hair as a rope to allow her rescuer, the prince, to climb into the tower. The other story is about a dwarf called Rumpelstiltskin, who wove gold out of straw for a girl to keep her from trouble with the king. To pay the dwarf, the girl promised to give her first-born child to him. This was unless she could find out his name; she does this and the dwarf tears himself in to through frustration. ...read more.

Such as the prince, he may be "gorgeous", but he just there to be looked at and not someone to put all your hopes into. The writer also used a bit of humour in this quote, an "axe" is also a slang term used today for an electric guitar. We would not expect a prince to come along to save a girl in a tower with an electric guitar and looking "gorgeous". This description of the prince makes him seem like he is someone from a dream or a rock star, someone you could not imagine yourself actually being with. There are more references to the prince being something for someone's imagination. "Just hang on and we'll get you out of there" he hollered like a fireman in some soap opera. People in soap operas are actors and this is what the prince is, he is trying to act as if he is the heroic savoir of this desperate, helpless woman. Our love now is a poem where the conflict lies in the fact that the two people involved in a relationship have completely opposite ideas of the present state of their love. The man in the poem believes that their love can be salvaged whereas the woman sees the relationship as over. ...read more.

This is rather depressing view and the man uses it as apart of his argument, that life is short and that youth should not be wasted. The writer emphasises that death is final and that in death her beauty will be lost, "thy beauty shall no more be found". He also points out that nothing will count after she is dead. The fact that she is going to be buried in a "marble vault", shows that she is rather wealthy, but, as he says, "In thy marble vault, shall sound my echoing song". He is trying to get across that even her wealth will not count in death, let her alone her beauty will be lost. The next point that the man makes is pretty horrific. "Worms shall try that long preserved virginity". The writer is trying to show the woman that what she fears in life, losing her virginity, in inevitable. Although if she waits until she is dead then worms eating her decaying corpse will take her virginity. The man is trying to persuade the woman through creating a sense of fear in her. He hopes that by doing this, she will start to see things from his point of view and sleep with him. To finish of the section in his argument, he again anticipates the next section. He says, "the grave's a fine and private place, but none, I think do there embrace". ...read more.