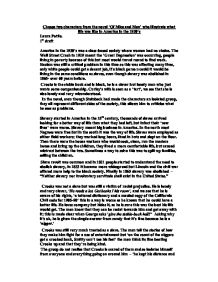 Choose two characters from the novel 'Of Mice and Men' who illustrate what life was like in America in the 1930's Laura Pottle. 1st draft America in the 1930's was a class-based society where women had no choice. The Wall Street Crash in 1929 meant the 'Great Depression' was occurring, people living in poverty because of this but most would travel round to find work. Racism was still a critical problem in this time so this was affecting many lives, only white people could get a decent job, if a black person could it would be living in the same conditions as slaves, even though slavery was abolished in 1865- over 60 years before. Crooks is the stable buck and is black, he is a clever but lonely man who just wants some companionship. Curley's wife is seen as a 'tart', we see that she is also lonely and very misunderstood. In the novel, even though Steinbeck had made the characters an isolated group, they all represent different sides of the society, this allows him to criticise what he sees as problems. Slavery started in America in the 15th century, thousands of slaves arrived looking for a better way of life than what they had left, but infact their 'new lives' were worse. ...read more.

However even saying this he is still tempted to join the dream, he wants to be around people and is happy when people talk to him. He says 'I didn't mean it. Jus' foolin'. I wouldn't want to go no place like that.' He knows he has to support black people and that it wouldn't happen. Through the character of crooks we see that Steinbeck thought that Crooks' was treated badly and that he obviously felt sympathy for him and all black people in America. We see examples of Crooks being afraid of all people, including Curley's wife, in a time where women weren't listened to, Steinbeck puts the message across that he shouldn't have to pull back and have to live in fear, worrying about what is going to happen to him and who by. If Crooks had been white he wouldn't be treated in the way he was. Curley's wife is another character that is seen as by the men on the ranch as insignificant, like Crooks. There are many similarities between the two; they are outcast, misunderstood, and oppressed. Neither are treated as equals and are trapped in the same life with no future. ...read more.

She was very pretty and simple, and her face was sweet and young.' This is saying that she is now at peace and in a way because her life was such a disaster in which she had no future she is better off dead. It was the only way she could be happy and escape Curley and her loneliness. The 1930s was a class- based society within America. Racism was an ongoing problem and black people were still being treated as slaves, even though slavery was abolished in 1865. The 'great depression' was also still a huge problem with 3 million people unemployed in 1930 and 13 million in 1932. People were living in poverty and any jobs going were poorly paid. However life was worst for black people, who were victims of racial prejudice and discrimination and women who were seen as insignificant and 'possessions' of their husbands or fathers and were only there to look 'purty' and look after the house. In the novel, even though Steinbeck had made the characters an isolated group, they all represent different sides of the society, this allows him to criticise what he sees as problems. Curley's wife and Crooks are just two characters that illustrate what life was like in America in the 1930's. ...read more.