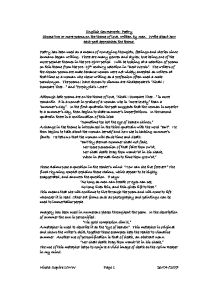 Choose two or more poems on the theme of love, written by men. Write about how each poet approaches the theme.

English Coursework: Poetry Choose two or more poems on the theme of love, written by men. Write about how each poet approaches the theme. Poetry has been used as a means of conveying thoughts, feelings and stories since humans began writing. There are many genres and styles; love being one of the more popular themes in the pre-1900 period. I will be looking at a selection of poems on this theme from the pre- 19th century selection in "Best Words". The writers of the chosen poems are male because women were not widely accepted as writers at that time so a woman who chose writing as a profession often used a male pseudonym. The poems I have chosen to discuss are Shakespeare's "Shall I Compare Thee..." and "Porphyria's Lover". Although both poems are on the theme of love, "Shall I Compare Thee..." is more romantic. It is a sonnet in praise of a woman who is "more lovely" than a "summer's day". In the first quatrain the poet suggests that the woman is superior to a summer's day, then begins to state summer's imperfections. In the second quatrain there is a continuation of this idea: "Sometime too hot the eye of heaven shines," A change in the theme is introduced in the third quatrain with the word "But". He then begins to talk about the woman herself and how she is lacking summer's faults. He tells us that the woman will elude time and death. ...read more.

These words are strong: "declines", "fade", "shade", therefore I do not think the poet has compromised his choice of words in order to preserve the rhyme scheme. The syllables of each line follow the pattern of iambic pentameter: 10 syllables with alternate stress. This makes the poem easier to read and also adds to the formality. Many features of this poem come together to make this a very formal sounding poem which is appropriate to the subject matter. Although "Porphyria's Lover" is on the theme of love, Robert Browning approaches the theme in an entirely different way to Shakespeare. Porphyria's lover was extremely insecure and was afraid that, although Porphyria was "Perfectly pure and good", she would leave him. He "debated what to do." in order to preserve the moment when she was his, then strangled her. These actions are not what would normally be deemed romantic, yet they were the actions of a man who was deeply in love. In the first few lines the poet describes the scene outside: "The rain set early in to-night, The sullen wind was soon awake, It tore the elm tops down for spite, And did its worst to vex the lake:" In this quatrain the wind is personified, bringing the scene to life. The initial setting of the scene makes the reader wary as storms and howling winds are often the first sign that something bad is about to happen in a film. ...read more.

The rhythm and rhyme scheme of this poem is comparable to that of "Shall I Compare Thee..." as both are strong. This poem has lines of eight syllables each with alternate stress. I think the frequent cases of enjambment, that is, one line following on from the previous, make it hard to detect this scheme when the poem is read and aloud. Despite this, the rhythm gives it a strong structure that is easy to read and flows well. The rhyme scheme is ABAB although it is not so strict that the choice of words has been compromised in order to force the rhyme. The words that conclude each line are of significant importance: "endeavour", "restrain" "spite" and I think the rhyme helps to emphasise these words. I think Robert Browning was trying to make known to the reader the darker side of love and explain how acts of love are not always as romantic as the giving of flowers. The poems are similar in their strong structures and imaginative use of imagery but I think Shakespeare and Browning have differing opinions of love. Both poems express the common desire of a lover for time to stand still but this desire is handled in two entirely different ways; one writes a poem, the other murders his loved one. Love, as a theme of poetry can be approached in a variety of forms and these two poems allow the reader to see what a romantic, or sinister, effect on a person love can have. ?? ?? ?? ?? Nicola Squire 10NW Page 1 26/04/2007 ...read more.