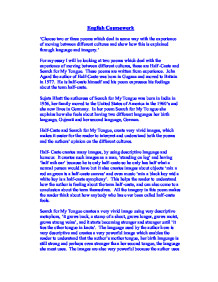 'Choose two or three poems which deal in some way with the experience of moving between different cultures and show how this is explained through language and imagery.'

English Coursework 'Choose two or three poems which deal in some way with the experience of moving between different cultures and show how this is explained through language and imagery.' For my essay I will be looking at two poems which deal with the experience of moving between different cultures, these are Half-Caste and Search for My Tongue. These poems are written from experience. John Agard the author of Half-Caste was born in Gugana and moved to Britain in 1977. He is half-caste himself and his poem expresses his feelings about the term half-caste. Sujata Bhatt the authoress of Search for My Tongue was born in India in 1956, her family moved to the United States of America in the 1960's and she now lives in Germany. In her poem Search for My Tongue she explains how she feels about having two different languages her birth language, Gujerati and her second language, German. Half-Caste and Search for My Tongue, create very vivid images, which makes it easier for the reader to interpret and understand both the poems and the authors' opinion on the different cultures. ...read more.

The images are also very powerful because the author uses metaphors instead of similes which make the reader feel as though it is very realistic and can almost image two tongues fighting. The structures of the two poems are quite similar but Search for My Tongue has only one stanza and Half-Caste has five stanzas. Another difference is that Search for My Tongue uses two different languages, however Half-Caste is also distinctive because of the language and accent used, 'explain yuself', and the way it is paragraphed because there is a very short paragraph at the beginning, a long paragraph in the middle and smaller paragraphs towards the end. John Agard writes in his accent to show that he is not ashamed of what he is and doesn't have to change himself for anyone or anything. Although the structures of these poems aren't very complicated they help to attract readers to them. Neither poems rhyme, but both have a rhythm. Half-Caste's rhythm is continuous, and is more effective when read aloud. When reading the poem you start talking in a Caribbean accent because of the words used and the speed of how ...read more.

This imagery in this poem is very vivid and helps the reader to understand and focus on the issues raised. Search for My Tongue message is about the poet's birth language which is gujerati, she describes this as her mother tongue and her second language which is English, and she describes this as her second tongue. The poet uses very descriptive language which creates vivid images for the reader. Using gujerati in the middle of the poems shows that her mother tongue, her birth language, is still strong and at times, even stronger then her second language. In conclusion both of these poems deal with the issues faced when moving between different cultures in their own ways. They both use language and imagery to express their messages Half- Caste explores the way that we use the term 'half-caste' in our vocabulary and exaggerates it. This is to a great effect as it makes the reader think more about racial issues and the way that we treat people from different cultures. Search for my Tongue deals with moving between different cultures by actually writing about the language barriers and losing your identity. This is how we can link the poems together and show how people move between different cultures. ...read more.