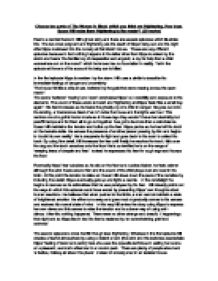 Choose two parts of The Woman in Black which you think are frightening. How does Susan Hill make them frightening to the reader?

Choose two parts of The Woman in Black which you think are frightening. How does Susan Hill make them frightening to the reader? (30 marks) Fear is a central theme in Hill's ghost story and there are several episodes which illustrate this. The two most poignant and frightening are the death of Kipps' baby son and the night after Kipps is allowed into the nursery at Eel Marsh House. These are very different episodes because in fact nothing happens in the latter other than Kipps is woken by the storm and hears 'the familiar cry of desperation and anguish, a cry for help from a child somewhere out on the marsh' which he knows has no foundation in reality. Yet in the episode at the end of his account his baby son is killed. In the first episode Kipps is awoken by the storm. Hill uses a simile to describe his immediate feelings of danger and uncertainty: 'The house felt like a ship at sea, battered by the gale that came roaring across the open marsh.' The words 'battered' 'roaring' and 'open' emphasise Kipps' vulnerability and exposure to the elements. ...read more.

Eventually Kipps' fear subsides as he sits on the floor and cuddles Spider, he feels calmer although the wind howls around him and the sound of the child plays over and over in his brain. At this point the tension is relieved. Susan Hill slows down the pace of the narrative by including fine detail. Kipps eventually gets up and lights a candle. In the candlelight he begins to recover as he rationalises that he was paralysed by his fear. Hill cleverly points out the ways in which this episode could have ended by presenting Kipps' own thoughts about human reactions. He believes that when pushed to the limits, a man cannot maintain a state of heightened emotion. He either runs away and goes mad or gradually comes to his senses and restores his normal state of mind. In this way Hill enters the story using Kipps to express her own views and this serves to relax the tension and is a clever way of using anti-climax. After this nothing happened. There were no other strange and dreadful happenings that night and as Kipps lies in bed his fear is replaced by 'an overwhelming grief and sadness'. ...read more.

The tension is broken when Stella and the baby come into sight. The baby is 'waving his little arms in delight'. Then almost in slow motion the woman in black reveals herself from behind a tree, the horse bolts and careers through the glade and hits 'a huge tree trunk', the baby is thrown clear (relief) against another tree.The irony here is sickening. Kipps can no longer continue with the story. Seven lines later he ends it with the word 'Enough'. The fear in the first episode is much more sustained and created in a very traditional way using pathetic fallacy, fine detail and strong emotive vocabulary. In contrast the episode where the baby is killed is shocking and horrific. The fear doesn't go away. The reader is left to decide which path this man Kipps followed after this. Did he run away and go mad? Or did he gradually come to his senses and resume a normal life? The story has come a full circle. We know that it took Kipps 13 years to recover to some state of normality but it could be argued that he is still haunted by the terrible memories and that is why in an effort to purge his life of fear he felt compelled to write his story. ...read more.