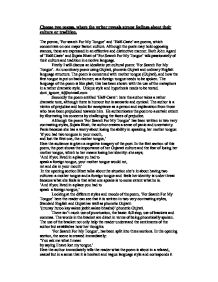 Choose two poems, where the writer reveals strong feelings about their culture or tradition.

Choose two poems, where the writer reveals strong feelings about their culture or tradition. The poems, 'For search For My Tongue' and 'Half-Caste' are poems, which concentrate on one major factor: culture. Although the poets may hold opposing stances, these are expressed in an effective and distinctive manner. Both John Agard of 'Half-Caste' and Sujata Bhatt of 'For Search For My Tongue' talk passionately of their culture and tradition in emotive language. Firstly I will discuss an idealistic yet cultural poem: 'For Search For My Tongue'. An unordinary poem using Gujrati, phonetic Gujrati and ordinary English language structure. The poem is concerned with mother tongue (Gujrati), and how the first tongue is put on back burner; as a foreign tongue needs to be spoken. The language of the poem is like plait; this has been shown with the use of the metaphors in a rather dramatic style. Unique style and hypothesis needs to be tested. [email protected] Secondly the poem entitled 'Half-Caste': here the author takes a rather dramatic tone, although there is humour but is sarcastic and cynical. The author is a victim of prejudice and looks for acceptance as a person and explanation from those who have been prejudiced towards him. He authenticates the poem to a certain extent by illustrating his concerns by challenging the faces of prejudice. Although the poem 'For Search For My Tongue' has been written in two very contrasting styles, Sujata Bhatt, the author creates a sense of panic and uncertainty. ...read more.

The first section of the poem is in many terms negative: 'your mother tongue would rot, rot and die in your mouth until you had to spit it out.' As in the first section, the author talks about discovering the loss of her mother, the ability to not speaking it anymore due to having to adapt a new tongue, foreign. A tongue, which is suited by the environment. The second section, gives the reader an insight of the authors dream, in which Bhatt discovers her mother tongue, realising it was never lost, just and been put on the back burner. The dream is in phonetic Gujrati, so those who can't read Gujrati have the help of the written terms. This section of the poem shows that the author is relieved to find that that her mother tongue still remains there. The final section is in comparison with the first section as the began with a negative tone, the author expressing the loss of her mother tongue: 'by saying I have lost my tongue.' And the final section ending in a positive tone, as she has rediscovered her tongue in her dream. The tone takes a merriment tone: 'I think I've lost the mother tongue, it blossoms out of my mouth.' She feels reassured. In the last section, there is a key metaphor: 'the bud opens, the bud opens in my mouth,' The language is a plant, like a plait. ...read more.

He does however use sarcastic humour to get his point of racism and prejudice across. 'Half-caste is a rather challenging poem, a through out the poem there is repetition of: 'Explain yuself wha yu mean' Agard challenges those who speak against half-castes, and asks them to give their interpretation of half-casts. 'Half-caste', is written in non-standard English, just like did Sujata Bhatt and is adapting a Caribbean accent. There is no punctuation besides the basic, though however the reader creates the punctuation and tone as he reads the poem aloud. If to summarise, between the poems, the author's, manage to demonstrate the relationship between the poems, in different but effective ways. 'Half-caste', Agard creates a victimising and frustrated imagery about those who are prejudice. Although there are corresponding styles are used and throughout the poem there remains one mood created, I feel the author was cynical to a point and manages distinctively to make his intended point. In contrast to 'For Search For My Tongue', Bhatt seems very uncertain as she feels she has lost the ability to speak her mother tongue and in contrast with Agard who seems very confident as he challenges those who are prejudice. He also is confident about his background, as is Bhatt. I think that Agard wants the reader to envisage how what he feels and what he has to say are two different things using non-standard English and phonetic Caribbean accent. However it is repetitive in that he creates humour, which is rather cynical. ...read more.