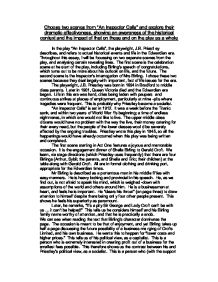 Choose two scenes from "An Inspector Calls" and explore their dramatic effectiveness, showing an awareness of the historical context and the impact of that on these and on the play as a whole In the play "An Inspector Calls", the playwright, J.B. Priestley describes, and refers to actual historical events and life in the Edwardian era. Throughout this essay, I will be focussing on two separate scenes from the play, and analysing certain revealing lines. The first scene is the celebration scene at he start of the play, including Birling's speech of congratulations, which turns out to be more about his outlook on life, and the future. The second scene is the Inspector's interrogation of Mrs Birling. I chose these two scenes because they deal largely with important, fact of life issues for the era. The playwright, J.B. Priestley was born in 1894 in Bradford to middle class parents. Later in 1901, Queen Victoria died and the Edwardian era began. Life in this era was hard, cities being laden with paupers and continuous strikes at places of employment, particularly at mine-pits where tragedies were frequent. This is probably why Priestley became a socialist. "An Inspector Calls" is set in 1912. It was a week before the Titanic sank, and within two years of World War 1's beginning; a time of endless nightmares, in which one would not like to live. ...read more.

We've passed the worst of it", and "We're in for a time of increasing prosperity". The way in which Birling says both lines, he sounds very sure of himself, as if he genuinely believes what he is 'preaching', but in reality he demonstrates na�vet�. The 1945 audience would see the na�vet� because they knew of the upcoming troubling times, of many more strikes and much more poverty. He also says "Fiddlesticks!" to a possibility of war. "Nobody wants war." he continues. In short, how wrong he was! There was not one, but two world wars since his speech (one in 1914, and the other in 1939). Eric tries (unsuccessfully) to point out the possibilities of a war, but Birling brags "You have a lot to learn". This suggests big-headedness to the audience, and they learn to dislike him for these reasons. Birling later tells of a friend who will be travelling on the Titanic, which is "unsinkable, absolutely unsinkable." The audience in 1945 would be able to see Priestley's use of dramatic irony again, as the Titanic sank on its maiden voyage to New York the week later. Another of his flawed assumptions is: "There will be progress everywhere - except Russia". This tells us that Mr Birling believes people are what they are, and cannot change their ways, a quite inaccurate statement as ...read more.

In fact, the audience finds information to the contrary elsewhere in the play. Mrs Birling says the people to blame for Eva Smith's demise are the girl herself and the "drunken idler of a father". The Inspector uses this to set Mrs Birling up. Sheila has already 'cottoned on' to this, but her attempts to warn her mother fall on deaf ears. The Inspector's massive presence creates an impact on Mrs Birling, and he masterfully pulls it off. Mrs Birling is led to say, "There should be no hushing up ... Make an example of him ... Public confession of responsibility". This is quite ironic as she tells others to she responsibility when she has / shows none herself. As soon as her speech is completed, she realises they are talking about her son, Eric. The interest and suspense suddenly heightens the tension. This was the biggest of her shortcomings, and shows how cold and bitter she is, showing no morality, responsibility and compassion. In conclusion, both scenes show Priestley's use of dramatic irony, as the audience know crucial details that not all of the cast members know. This is extremely effective and works successfully to heighten the tension, suspense, and interest in the play; it certainly kept me in suspense, waiting for more! ?? ?? ?? ?? ...read more.