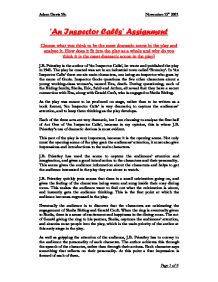 'An Inspector Calls' Assignment Choose what you think to be the most dramatic scene in the play and analyse it. How does it fit into the play as a whole and why do you think it is the most dramatic scene in the play? J.B. Priestley is the author of 'An Inspector Calls', he wrote and published the play in 1945. The play he created was set in an industrial town called 'Brumley'. In 'An Inspector Calls' there are six main characters, one being an inspector who goes by the name of Goole. Inspector Goole questions the five other characters about a young working-class woman's, named Eva, death. During questioning, each of the Birling family, Sheila, Eric, Sybil and Arthur, all reveal that they have a secret connection with Eva, along with Gerald Croft, who is engaged to Sheila Birling. As the play was meant to be produced on stage, rather than to be written as a book format, 'An Inspector Calls' is very dramatic; to capture the audiences' attention, and to keep them thinking as the play develops. Each of the three acts are very dramatic, but I am choosing to analyse the first half of Act One of 'An Inspector Calls', because in my opinion, this is where J.B. Priestley's use of dramatic devices is most evident. This part of the play is very important, because it is the opening scene. Not only must the opening scene of the play grab the audiences' attention, it must also give impressions and introductions to the main characters. J.B. Priestley has used the scene to capture the audiences' attention and imagination, and gives a good introduction to the characters and their personality. This scene gives the audience information about the characters and helps to get the audience interested in the play they are about to watch. J.B. Priestley quickly puts across that there is a small celebration going on, and gives the feeling of the characters being warm and snug inside their cosy dining room. ...read more.

When his sister (Sheila) questions why he did this action, Eric quotes "I don't know-really. Suddenly I felt I just had to laugh." This also leads to the conclusion of him being immature, like his sister, and they both clearly do not have a good relationship with each other. Eric does not do much talking in the first act, and so adds the sense of mystery to his character. I am not sure if this is what J.B. Priestley intended, but this was what I thought he might be trying to do, as it draws the imagination of the audience as they wait for his character to unfold. Mystery to a character is a dramatic technique used by many playwrights. I think that J.B. Priestley is using these five characters to reflect on the sorts of people that are in society today, including the self-centred businessman, the greedy and nervous boys, the trouble making girls, and the wives that feel trapped because they cannot express their feeling because they are afraid of what other might say. I believe that these are the five main types of people that Priestley believed to be in modern day society. J.B. Priestley seems to have strong opinions (and to some extent stereotypical views) of society, and he tries to express his views in his play by using the Birling family as a microcosm that represents society. Act one conveys the scene extremely well to the audience. They get a good insight into the various characters. The author uses many dramatic devices; the main one that J.B. Priestley uses in this part of the play is dramatic irony. Dramatic irony is a device used by playwrights to emphasise their message to the audience. A character is made to say something that has a different meaning for the audience than it does for the characters involved, the audience is aware of something the character(s) ...read more.

At the end of the scene Mr Birling starts lecturing Gerald and Eric. He starts expressing his negative views on community and society, "- community and all that nonsense." and "- a man has to look after himself...". When he is in the middle of a sentence, just after these quotations, the doorbell rings. I think J.B. Priestley did this on purpose to help express some more of his belief of community and everyone helping and protecting each other. The doorbell ringing stops Mr Birling from saying anything else negative about community. This is dramatic because this is when people would least expect Arthur Birling to be interrupted. The audience would start thinking why the doorbell has rung, and who rung it. It is also a part where J.B. Priestley hides his message in the story, which is that people should all be helping each other, to live in a community. The audience then learns that a police inspector has rung the door and is waiting to speak to Mr Birling. When the maid, Edna, tells Mr Birling he replies "An inspector? What kind of inspector?" This is the first sign that Mr Birling is starting to worry, as he has just quoted that "so long as we behave ourselves, don't get into a police court or start a scandal." He is thinking that he or his family might be in trouble with the law, and is worried because if this is true it may ruin his chances of receiving a knighthood. He is trying to hide (unsuccessfully) that he is frightened, which makes the end of the scene very dramatic, and helps to lead on to the next scene of the play. J.B. Priestley's use of dramatic devices is most concentrated in this scene, though he uses them throughout the play. This has made his play very successful, and enjoyable to read and watch, even though the message behind the story is a serious one. Adam Davis 10c November 15th 2001 Page 1 of 6 ...read more.