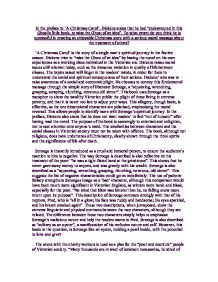 In the preface to 'A Christmas Carol', Dickens states that he had "endeavoured in this Ghostly little book, to raise the Ghost of an idea". To what extent do you think he is successful in creating an enjoyable Christmas story with a serious moral message about the treatment of others? 'A Christmas Carol' is the story of a single man's spiritual journey in the festive season. Dickens tries to "raise the Ghost of an idea" by basing the novel on his own experiences as a working class individual in the Victorian era. Dickens raises moral issues still relevant today, such as the immense variation in quality of life between classes. The topics raised will linger in the readers' minds, in order for them to understand the social and spiritual consequences of their actions. Dickens' aim was to raise awareness of a social and economic plight. He chooses to convey this fundamental message through the simple story of Ebenezer Scrooge, a "squeezing, wrenching, grasping, scraping, clutching, covetous old sinner". This book uses Scrooge as a metaphor to show the wealthy Victorian public the plight of those living in extreme poverty, and that it is never too late to adjust your ways. ...read more.

However improperly the Cratchits were dressed, they still delighted in each other: "they were happy, grateful and pleased with one another". The whole family contrasts strongly with the representation of Scrooge, as ironically, while Scrooge has money, he is dismal, and though the Cratchits are poor, they are merry. This could signify that although the Cratchits are not wealthy, they are rich in spirit, and full of love for life and one another. Scrooge, on the other hand, is alone with no-one to love or have love him back. The audience would therefore want to follow the Cratchits example, and rather be merry and poor than rich and miserable. The prediction of Tiny Tim's death at this point in the novel makes the audience feel even more sympathetic for the Cratchits and wary of what is to come. The prophecy also brings another side Scrooge, "'Spirit,' said Scrooge, with an interest he had never felt before, 'tell me if Tiny Tim will live.'" This shows Scrooge to be more loving and caring, as he has never felt interest in another person until this point. This also places Scrooge in a divine position, as he now has power over life and death. ...read more.

We see clearly how Scrooge's life could have been, was it not for his gluttony for material wealth. Instead, as a result of this, Scrooge's death, as shown to him by the Spirit of Christmas Yet to Come, is unmourned. Ironically, in death, people see Scrooge the way he saw them in life, as a source of money. "He frightened every one away from him when he was alive, to profit us when he was dead!" Knowing this transforms Scrooge's personality completely, changing his outlook on money and life forever. The immense variation in Scrooge's attitude leaves the audience encouraged, with a improved will, hoping they too can benefit from the changes made in their lives. The transformation is also shown by pathetic fallacy, as the weather no longer reflects Scrooge's sullen, cold, nature but is instead sparkling and bright. 'A Christmas Carol' conveys simple but effective moral messages, such as the fact that happiness is not found in wealth, and to treat others as you yourself would like to be treated. By showing the infinite change in a single character, Dickens manages to achieve all aims set in the preface, and to raise moral issues to make the reader think. He conveys all this into and entertaining and enjoyable novel, to keep the reader captivated. ?? ?? ?? ?? ...read more.