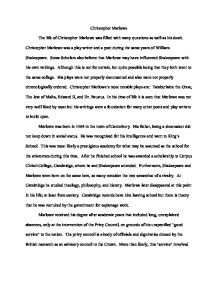 Christopher Marlowe The life of Christopher Marlowe was filled with many questions as well as his death. Christopher Marlowe was a play writer and a poet during the same years of William Shakespeare. Some Scholars also believe that Marlowe may have influenced Shakespeare with his own writings. Although this is not for certain, but quite possible being that they both went to the same college. His plays were not properly documented and also were not properly chronologically ordered. Christopher Marlowe's most notable plays are: Tamburlaine the Great, The Jew of Malta, Edward II, and Dr. Faustus. In his time of life it is seen that Marlowe was not very well liked by most but his writings were a foundation for many other poets and play writers to build upon. Marlowe was born in 1564 in the town of Canterbury. His father, being a shoemaker did not keep down in social status. He was recognized for his intelligence and went to King's School. This was most likely a prestigious academy for what may be assumed as the school for the aristocrats during this time. After he finished school he was awarded a scholarship to Corpus Christi College, Cambridge, where he and Shakespeare attended. Furthermore, Shakespeare and Marlowe were born on the same here, so many consider the two somewhat of a rivalry. ...read more.

There is a big mystery of Marlowe's death. Nobody truly knows the exact way he died but the most popular one is that he died in a tavern in the town of Deptford. He and his friend, Ingram Frizer, fought over paying the bill (my theory is that Ingram said a momma joke during the fight because soon after...) and soon after the fight Marlowe grabbed Ingram's dagger and attacked him from behind. Frizer was able to grab get the dagger from Marlowe and stabbed him fatally in the eye. But the mystery of this whole death is that Marlowe may have in fact faked his death. One week before his "death," Marlowe's roommate was in fact kidnapped and tortured over assumptions that Marlowe may have been a heretic and an atheist. A warrant was out for his arrest but he coincidently died. A reason for believing that the death was faked is that Marlowe's friends on his final night had close connections to Francis Walsingham, Queen Elizabeth's spy. rumor has persisted that Marlowe's death was faked on Walsingham's orders, so that the Privy Council would obviously end pursuit of Marlowe. He was buried in an unknown grave that leads to further speculation that Marlowe may have still been alive. Much of Marlowe's life would have brought much controversy. ...read more.

As far as Christopher Marlowe's career is considered, his work was glorified after his death. Obviously no one knew of the impact that his writing would have on English literature and the influence it would have on Shakespeare's play writes. Shakespeare mastered blank verse after Marlowe introduced it into theatre. But even so, critics of his time recognized his talents. Robert Greene (1560?-1592) says "...who hat said with thee, There is no God, should now give glorie unto his greatnesse." It is in that line that gives proof that people immediately recognized his talents. Modern Criticism defiantly did what Robert Greene and glorifies his talents as well as his life. Today's critics also make some outrageous assumptions about Christopher. But for such little knowledge on someone and so many speculations in his life, people cannot help but to be intrigued with the man's career. Christopher Marlowe...A man who has no certain last name. A man who was incognito during a certain point of his life. A man believed in being a spy. A man who was a street fighter. A man who was believed to be a homosexual. A man who was believed in being an atheist. A man who was trouble with the law. A man who introduced blank verse to theatre. A man who faked his death. Christopher Marlowe is a man of unanswered questions, but what is for certain is his impact with the English language. ...read more.