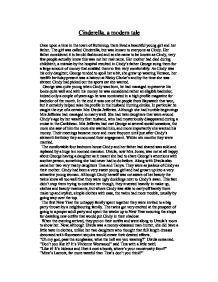 Cinderella, a modern tale Once upon a time in the town of Buttercup, there lived a beautiful young girl and her father. The girl was called Cinderella, but was known to everyone as Cindy. Her father considered it to be old-fashioned and so she came to be known as Cindy, very few people actually knew this was not her real name. Her mother had died during childbirth, a mistake by the hospital resulted in Cindy's father George suing them for a large amount of money that enabled them to live very comfortably. As Cindy was his only daughter, George tended to spoil her a bit, she grew up wearing Versace, her twelfth birthday present was a haircut at Nicky Clarke's and by the time she was sixteen Cindy had picked out the sports car she wanted. George was quite young when Cindy was born, he had managed to preserve his looks quite well and with his money he was considered rather an eligible bachelor, indeed only a couple of years ago he was nominated in a high profile magazine for bachelor of the month. In the end it was one of the people from Baywatch that won, but it certainly helped raise his profile in the husband hunting circles. In particular he caught the eye of a certain Mrs Ursula Jefferies. Although she had humble beginnings Mrs Jefferies had managed to marry well. She had twin daughters that were around Cindy's age by her wealthy first husband, who had mysteriously disappeared during a cruise in the Caribbean. Mrs Jefferies had met George at several social occasions, the more she saw of him the more she wanted him, and more importantly she wanted his money. Their meetings became more and more frequent until just after Cindy's sixteenth birthday they announced their engagement. Within six months they were married. The comfortable four bedroom house Cindy and her father had shared was sold and replaced by a huge ten roomed mansion. ...read more.

Said Cindy, who was now starting to get rather worried and also a little cross at this strange woman, who had waltzed into her house, then started talking about Fairy Godmothers and talking to Father Christmas. "Well the rudeness of it, I don't know. Listen I am your fairy godmother, you want me to prove it? Well fine." She suddenly launched into a quick, matter of fact summary of Cindy's life up to this moment. "You are Cinderella Jones, you were born on 18th May 1981 at Buttercup hospital, father called George who passed away very suddenly at New Year, mother called Mary who also died, this time in childbirth, I think we can skip the in-between years up to this evening. You wanted to go to the party Gary Westwood was holding tonight, but because of that horrible old hag you have to live with you can't go, which was why you were crying your eyes out when I came along just now. Now did I make any mistakes? Because I know I can sometimes, I'm gatting on a bit now, the memories..." "You really are my fairy godmother aren't you?" said Cindy. She had listened to everything her fairy godmother had to say in open mouthed amazement. "Of course.Oh look the kettle has boiled, shall I make the tea?" "But I didn't put it on!" Cindy spun round to see the kettle sat on the side with steam pouring out. "Well if we were to wait for you to put it on we'd have been here until the cynics finally gat around to realising that pigs really can fly. So I did it myself instead. By magic of course" she added. "You mean pigs really can fly?" "Of course my dear." Cindy had been so dazzled by everything this strange visitor had already told her, that she felt quite capable of believing this last comment. She suddenly realsied that she still didn't know why she had been visited. "Why are you here? ...read more.

"I'm expecting him any minute so you might want to start smartening yourself up." These were Ursula's final words before leaving the kitchen. "Well what are you waiting for you heard the woman let's smarten you up." The Fairy Godmother was saying. "Where did you go?" Asked Cindy. Slightly mystified as to how she managed to disappear and then reappear again so quickly. "I didn't go anywhere, I just made myself invisible." Suddenly Cindy heard the doorbell chime, Ursula had one of the tacky ones that played a different tune each time, it also meant it was hard to ignore. "Quick! he's here!" "Okay, calm down, calm down. Remember how we did it, nice thoughts." She waved her magic wand and Cindy was transformed into Cinderella once more. The tiara was in place, the dress fitted perfectly once more, the only thing missing was the right shoe. Cinderella held the left one in her hand. "Go get him Cinderella" Said the Fairy Godmother, once again close to tears. Cinderella walked along the corridor to the hallway where she knew Gary would be waiting to be shown in. He had his back to her when she opened the door, when he turned and saw her his mouthed opened in surprise. "Cinderella!" "I've been waiting for you Gary." "I've been looking for you. Will you marry me?" "Of course. And I promise I won't run away from you this time." He walked over to her, kissed her gently on the cheek and said "I'm never going to let you out of my sight ever again." He then picked her up and carried her out to his car. Ursula and the twins stood in the doorway watching in horror as Gary placed Cinderella in the passenger seat then reaches into the back seat and brings out the shoe to match the one Cinderella was still holding in her hands. Cinderella put them on before waving goodbye to the people and place she had longed to be rid of ever since her father died. ...read more.