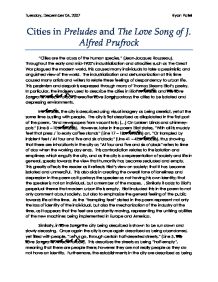 Cities in Preludes and The Love Song of J. Alfred Prufrock

Cities in Preludes and The Love Song of J. Alfred Prufrock "Cities are the abyss of the human species." (Jean-Jacques Rousseau). Throughout the early and mid-1900's industrialization and atrocities such as The Great War plagued the modern world, this caused many individuals to take a pessimistic and anguished view of the world. The industrialization and dehumanization at this time caused many artists and writers to relate these feelings of despondency to urban life. This pessimism and despair is expressed through many of Thomas Stearns Eliot's poetry. In particular, the imagery used to describe the cities in Eliot's Preludes and The Love Song of J. Alfred Prufrock (hereafter Love Song) portrays the cities to be isolated and depressing environments. In Preludes, the city is described using visual imagery as being derelict, yet at the same time bustling with people. The city is first described as dilapidated in the first part of the poem, "And newspapers from vacant lots; (...) On broken blinds and chimney-pots" (Line 8 - 10, Preludes). However, later in the poem Eliot states, "With all its muddy feet that press / To early coffee stands" (Line 17 - 18, Preludes) ...read more.

of the industry at the time, as it appears that the feet are constantly moving, representing the untiring abilities of the new machines being implemented in Europe and America. Similarly, in Love Song, the city being described is shown to be run down and slowly decaying. Once again the city is once again described as being abandoned, yet filled with people, "Let us go, through certain half-deserted streets," (Line 5, The Love Song of J. Alfred Prufrock). This describes the streets as being "half-empty", meaning that there are people there; however they are not really people as they do not have an identity. Furthermore, the establishments in the city are described as being run-down using visual imagery, "One-night cheap hotels / And sawdust restaurants with oyster-shells:"(Line 6 - 7, The Love Song of J. Alfred Prufrock). The images of "cheap hotels" and "sawdust restaurants" conjure images of neglected buildings. The sawdust stated represents the wear of the buildings and the slow decay of their foundations. However, "one-night cheap hotels" and "sawdust restaurants with oyster-shells" could also represent the slow decay of society, as one may take a prostitute to a hotel for only one night, and the reference to "oyster-shells" which is a slang term for the female genitals. ...read more.

Alfred Prufrock), thus showing pollution as filling the city. This contamination is a result of the rapid industrialization taking place at the time, and represents not only the decline in the health of the city's inhabitants, but also the slow decay of society, as the cities inhabitants represent society in general. This greatly affects the reader as it once again adds to the tone of self-destruction, as the creators of the machines and factories creating the pollution were humans. Eliot included this imagery not only to add to the tone of the poem, but also to add his personal experiences into the poem, as factories in his hometown, St. Louis, Missouri, blew plumes of smoke over the Mississippi river, thus aiding in the contamination of the Earth. In final analysis, the cities described in Preludes and The Love Song of Alfred J. Prufrock are shown to be depressive, derelict and lonely. Visual imagery is used effectively by Eliot to portray the cities in a view which not only reflected the rapid industrialization and later on the Great Depression, but also the decline of society and humanity as a whole. ?? ?? ?? ?? Tuesday, December 04, 2007 Ryan Patel ...read more.