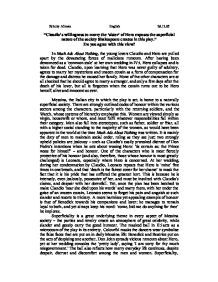 &quot;Claudio's willingness to marry the 'sister' of Hero exposes the superficial nature of the society Shakespeare creates in this play.&quot;Do you agree with this view?

Felicity Allman English 26.12.05 "Claudio's willingness to marry the 'sister' of Hero exposes the superficial nature of the society Shakespeare creates in this play." Do you agree with this view? In Much Ado About Nothing, the young lovers Claudio and Hero are pulled apart by the devastating forces of malicious rumours. After having been denounced as a 'common stale' at her own wedding in IV:i, Hero collapses and is taken for dead. Claudio, upon learning that Hero was never guilty of adultery, agrees to marry her mysterious and unseen cousin as a form of compensation for the damage and distress he caused her family. None of the other characters are at all shocked that he should agree to marry a stranger, and only a few days after the death of his lover, but all is forgotten when the cousin turns out to be Hero herself, alive and innocent as ever. Messina, the Italian city in which the play is set, is home to a naturally superficial society. There are strongly outlined codes of honour within the various sectors among the characters, particularly with the returning soldiers, and the Watch, whose systems of hierarchy emphasise this. Women are viewed simply as virgin, housewife or whore, and must fulfil whatever responsibilities fall within their category. Men also fall into stereotypes, such as father, soldier or friar, all with a higher social standing to the majority of the women, as would have been apparent in the world at the time Much Ado About Nothing was written. ...read more.

Such a song symbolizes Claudio's inconstancy, yet the union of Beatrice and Benedick is also represented. The other, Pardon, Goddess of the Night, sung by Balthasar again, but in V:iii, is the reverse song. It apologises for such an inconstancy 'pardon...those that slew thy virgin knight', and heralds the renewal of love and reconciliation of friends. The force of opposites with the play enhances the symmetry of the structure; malevolent and benevolent intentions upon the same acts create wildly different results. An example of this is Beatrice and Benedick's deliberate overhearing of their flattery of one another, a plot by their friends to bring them together: 'when Beatrice doth come...my talk to thee must be how Benedick is sick in love with Beatrice', says Hero to Ursula, III:I, thus uniting the pair; whereas in III:ii, Don John's describes to Claudio and Don Pedro how 'the lady is disloyal' which serves his intention of driving the couple apart. Yet the symmetry is completed in the final scene, for as the play began happily, it should end so. There are four would-be protagonists within this play, as well as several minor characters without whom the story could not have been carried out in the way it was. These people - such as Hero's attendant Ursula; Dogberry and Verges of the Watch; and Don John's followers Conrade and Borachio - play crucial roles in pointing the main characters towards their final goal, with all the mishaps and misunderstandings upon the way, in the tragedy-style way this play is constructed. ...read more.

Claudio, also, upon agreeing to marry Antonio's daughter ('I do embrace your offer') could claim that he was seeking forgiveness for having wronged Hero, and making little sacrifice for the greater happiness of the community. However, it is easier to condemn than to forgive such an action, especially in such a case as this. For a young, impressionable man to be persuaded that his fianc�e was having an affair, denounce her at their wedding, seal her tomb in the knowledge of her innocence, and then to marry her cousin, of whom he has only heard, the easiest conclusion to come to is that there was never any love in the relationship. Lust, urged on by the approval of peers and a pretty face, carried the engagement of the two strangers, both na�ve and malleable, in a city where jealousy, possessiveness and superficiality are encouraged. All is well once the cousin has been revealed as the original fianc�e, but it serves the intended purpose of highlighting how easily an entire community can be built of false values; the masked ball does the same. In conclusion, I believe that Claudio's eagerness to redeem himself, while regaining almost an exact copy of what was originally his, allows the audience to see all too clearly just how superficial Messina's society was, and how selfishness was rarely condemned. In the final scene, Claudio is rewarded for his acceptance of his wrongs with 'another Hero', yet there is a bitter taste in the mouth that he did not receive sterner punishment. Yet all turns out well for the characters, as both couples are sent off to church. ...read more.