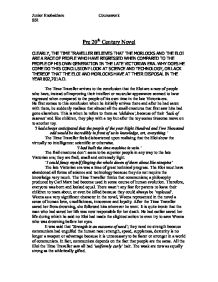 Clearly, the Time Traveller Believes That the Morlocks and the Eloi Are a Race of People Who Have Regressed When Compared To the People of His Own Generation In the Late Victorian Era. Why does he come to this conclusion?

Since medical science's mission was finally accomplished, it was abandoned and all knowledge of drugs, injections or prescriptions was simply forgotten since it was considered irrelevant, so buildings, which had medical references, were simply left and then started to gain a 'dilapidated look.' The only reason the Eloi would ever even enter such a building was to sleep inside instead of outside for fear of the Morlocks devouring them. The Eloi 'were strict vegetarians', which may account for there frail bodies. Their museums still housed, historical artefacts like weapons and 'decaying vestiges of books' but it appeared that no Eloi had even attempted use it. What was astonishing was how the Eloi are entertained by fire from a matchstick. Fire was mans first discoveries and since then, fire had become a major part of our lives, but thousands of years later for some undisclosed reason man seemed to have forgotten one of his earliest discoveries, to keep warm and scare wild animals away. 'The art of fire-making has been forgotten on the earth'. The Morlocks too are small but unlike the Eloi aren't frail. The Morlocks have long, sharp nails and in fact compared to the Eloi all other animals has been extinct; there are only two types of creatures; Eloi and Morlocks. 'Cattle, sheep, dogs had followed the Ichthyosaurus into extinction' At first, he suspects that the Eloi are the superior creatures they are surrounded by beauty and tranquillity and the Morlocks are the inferior creatures that must live underground. ...read more.

'Nature never appeals to intelligence until habit and instinct are useless. There is no intelligence where there is no change and no need to change.' Even the language changed from rather complex language we now speak to 'excessively simple' composed of substantives and verbs and little use of figurative language and abstract terms. After several generations, the descendants would have no need to have knowledge of how this place came to be but that it is there for them. The future cannot truly hold the prospect of infinite advances can it? H.G. Wells was the first to bring a strong sense of how disturbing the future could be as a result because of how society acts now. The Time Traveller went forward a mere century and the earth seemed to change remarkably, the sun seemed to slow down and eventually suspend in the heavens bigger and redder that ever and the moon seemed to of altogether vanished. In addition, an unknown planet seemed to cover up a small section of the sun. The Eloi and Morlocks seemed to have died out and the Time Traveller explains about his problems breathing which suggests a deficiency in oxygen. The only creatures the Time Travellers sees are giant crabs, big as tables. Clearly here, H.G. Wells is stating that the future looks bleak. 'Growing pile of civilization only a foolish heaping that must inevitably fall back upon and destroy its makers in the end' ?? ?? ?? ?? Junior Enobakhare Coursework SS1 ...read more.