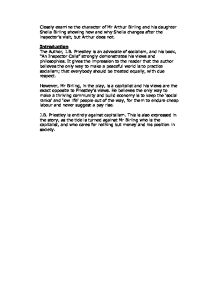 Closely examine the character of Mr Arthur Birling and his daughter Sheila Birling showing how and why Sheila changes after the inspector(TM)s visit, but Arthur does not

Closely examine the character of Mr Arthur Birling and his daughter Sheila Birling showing how and why Sheila changes after the inspector's visit, but Arthur does not. Introduction The Author, J.B. Priestley is an advocate of socialism, and his book, "An Inspector Calls" strongly demonstrates his views and philosophies. It gives the impression to the reader that the author believes the only way to make a peaceful world is to practice socialism; that everybody should be treated equally, with due respect. However, Mr Birling, in the play, is a capitalist and his views are the exact opposite to Priestley's views. He believes the only way to make a thriving community and build economy is to keep the 'social ranks' and 'low life' people out of the way, for them to endure cheap labour and never suggest a pay rise. J.B. Priestley is entirely against capitalism. This is also expressed in the story, as the tide is turned against Mr Birling who is the capitalist, and who cares for nothing but money and his position in society. Mr Birling is a very proud and pompous character, and his worst fear would be to lose his dignity and respect in the community as he mentions fearfully, "There'll be a public scandal" - he fears this most, as it would prevent him from gaining his higher position, or receiving a knighthood. Mr Birling is full of his own importance and is concerned about his own social status and is anxious to receive a knighthood so he believes he cannot afford to have any scandal attached to him and his family, 'So long as we behave ourselves and don't get into the police court.' ...read more.

Birling believes that the working class people have no right to go on strike, they should be happy with what little they receive. He says it's his duty to keep labour costs down and if they dislike it then they "Can go work somewhere else." However, he and the Inspector both know that the working class cannot find a job that easily, and Birling goes on to say that all the workers soon came back to work as they needed the money. He explains that a few workers had gone on strike and as a punishment he sacked the ringleader, one of whom was Eva Smith, to ensure that no one thinks about going on a strike again. Birling says that if the workers were not controlled, "They would soon be asking for the earth", to which the Inspector replies, "Its better to ask for the earth than to take it." This also shows that the Inspector is very sharp witted, quick and clever at his replies - he knows his job well. Birling obviously dislikes this, and this is why he repeatedly objects to the Inspector's questions trying to get him to leave. He is very worried about protecting his family, but much more importantly, his reputation. Spoiling his reputation would mean there would be a public scandal resulting in him not receiving his knighthood. When he finds out the Inspector was a hoax he goes back to being as he was before, acting as though nothing has happened, but he does admit that the Inspector gave him a scare. ...read more.

As proven at the end of the play, the "Inspector" was in reality not an Inspector. The author leaves us in suspense as to who this may be. I believe, Mr Goole could be a socialist who has been studying the case of Eva Smith for many years and now realizes all the trouble she has gone through, decides to teach the Birlings a lesson, as to show them how selfish they are. He could also be a prophetic character from the unreal world, like for example, an angel or a fairy come on behalf of the poor oppressed young Eva, again solely to teach the family a lesson. Mr Goole could also be a friend or relative of Eva Smith who cares about Eva and is very upset and angry about how she has been treated, therefore comes to avenge her oppressors in some way. He could be some sort of prophet or messenger come from God to avenge the poor girl and to teach the Birlings something important. He could be a polite Inspector from another district who came to work on the case. J.B. Priestley is a sociologist and in the play, the Inspector expounds many socialist ideas about having a fair world, etc. Therefore, the Inspector is representing Mr Priestley as a sociologist to convey his message to viewers. The Inspector's voice is also the author's voice; all the author's ideas and philosophies are portrayed as correct with the help of the Inspector and Mr Birling, who is a capitalist and proven wrong at the end of the book. ...read more.