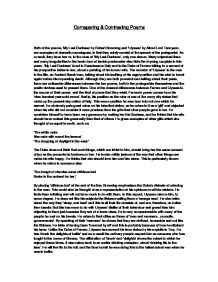 Comaparing & Contrasting Poems Both of the poems, 'My Last Duchess' by Robert Browning and 'Ulysses' by Alfred Lord Tennyson, are examples of dramatic monologues, in that they solely consist of the speech of the protagonist. As a result, they have few or, in the case of 'My Last Duchess', only one stanza. Many enjambed lines and many irregularities in the basic form of iambic pentameter also hide the rhyming couplets in this poem. 'My Last Duchess' is set in Renaissance Italy and is the Duke of Ferrara talking to a servant of his prospective father-in-law, about a painting of his former wife. The narrator of 'Ulysses' is the man in the title, an Ancient Greek hero, talking about his loathing of his regal position and his wish to travel again before his impending death. Although they are both powerful men talking about their pasts, there are noticeable differences between the two poems, both in the protagonists themselves and the poetic devices used to present them. One of the clearest differences between Ferrara and Ulysses is the source of their power, and the kind of power that they wield. Ferrara's power comes from his 'nine-hundred-years-old-name', that is, his position as the ruler of one of the many city states that make up the present-day nation of Italy. This was a position he was born into-not one which he earned. He obviously puts great value on his inherited status, as he refers to it as a 'gift' and objected when his wife did not consider it more precious than the gifts that other people gave to her. ...read more.

Interestingly one of the major similarities between the two protagonists is that they have both killed. However, they have exterminated people in very different ways. Ulysses homicide would, in the eyes of Ancient Greece, have been seen as heroic. He has battled on the 'ringing plains of windy Troy'. 'Ringing' is an onomatopoeia and combined with 'windy' gives a real sense of the frantic conflict on a desolate battlefield, with the sounds of swords crashing together. It was out of his ability as a warrior that his fame and heroism was born, and he enjoyed this sort of admiration. Conversely, the Duke of Ferrara's killing was not heroic. It was not even personal, as he himself did not even wield the axe. He just 'gave commands;' and the job was done for him. The way in which he expresses it tells us a lot. Firstly, all he had to do was give commands, he knew that there was no question of them not being obeyed. Also, he is obeying etiquette by referring to the execution in this way. In the highly formal world of Renaissance Italy, it would have been incredibly bad mannered to talk about killing someone. It was much better to dress it up in euphemisms. The semi colon that shortly follows the reference to the execution not only finishes off an end-stop line emphasising the word 'commands', but it also shows that there is a caesura. The Duke pauses slightly as if to dwell on the unpleasant episode in his past. ...read more.

The use of the image of an arch also implies that once one has gone through experience, one emerges as something different at the other side. This metaphor is mirrored by another, which harks back to Ulysses' days in battle. He says that to stay still and not to use your life is like a sword left 'To rust unburnished', whereas to travel and strive for knowledge is making the sword 'shine in use'. The contrast between the light of 'shine' and the dullness of 'rust' shows how much travelling is, in Ulysses' opinion, better than a sedentary existence. Tennyson also uses assonance to show the unknown aspect of the ocean that so draws Ulysses. When looking towards the ocean, Ulysses tells the reader 'There gloom the dark, broad seas'. The assonance emphasises the vast unexplored expanse of the ocean. The language is also quite dark recognising how the sea can be a dangerous evil as well as a friend in the quest for knowledge. I think that 'Ulysses' is the more successful, because I find the imagery far more emotive and vivid. 'My Last Duchess' was too lacking in emotion and I thought that it could have worked equally well, if not better, as a simple speech and not as a poem at all. Whereas I enjoyed the interesting perspective that Tennyson took, looking back on the travels of Ulysses, rather than describing them as has so often been done before. It was also a very powerful image - that of a man who has realised that he has little time left, but who is going to make sure that he does not waste his last days. ...read more.