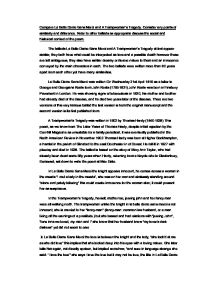 comaprrison of La Belle Dame Sans Merci and a trampwoman

Compare La Belle Dame Sans Merci and A Trampwoman's Tragedy. Consider any points of similarity and difference. Refer to other ballads as appropriate discuss the social and historical context of the poem. The ballads La Belle Dame Sans Merci and A Trampwoman's Tragedy at first appear similar; they both have what could be interpreted as love and a possible death however these are left ambiguous, they also have similar dreamy or illusive nature to them and an innocence conveyed by the main characters in each. The two ballads were written more than 80 years apart from each other yet have many similarities. La Belle Dame Sans Merci was written On Wednesday 21st April 1819 as a letter to George and Georgiana Keats form John Keats (1795-1821) John Keats was born in Finsbury Pavement in London. He was showing signs of tuberculosis in 1820, his mother and brother had already died of the disease, and he died two years later of the disease. ...read more.

her husband knew "my lover's dark distress" yet did not seem to care In La Belle Dame Sans Merci the love is between the knight and the lady, "she look'd at me as she did love" this implies that she looked deep into his eyes with a loving nature. She later tells him again, not directly spoken, but implied somehow, "and sure in language strange she said- 'I love the true'" she says I love the true but it may not be true, the title In La Belle Dame Sans Merci translates to the beautiful woman without mercy. Love in trampwoman's tragedy is less so, she refers to her husband as her "fancy-man" this implies that she is married to him but does not love him and may only want a short term relationship, however she later calls him lover "my lovers dark distress" but this is only after she had laid John's hand on her waist "laid his hand my waist upon" so this could have been guilt. ...read more.

side" this is after he kills the lady he dreams, maybe this is a vision of hell for him realising what he has done to the lady. In A Trampwoman's tragedy there is also a dreamy nature, the repeating of some phrases "The taverns tell the gloomy tale, the gloomy tale" "Thereaft I walked the world alone, alone, alone!" this may suggest that the trampwoman, mother lee, jeering John and her Fancy-man are all exhausted, the repetitive echo presents this. Even though two different people wrote these two ballads over 80 years apart they are very similar in the tone, the style and the emotions conveyed. The structure of them is also similar they both have an ending which is linked to the beginning. However they do also differ in ways, in A Trampwoman's Tragedy the death of john is clear and obvious but in La Belle Dame Sans Merci the death is left ambiguous. Overall the two ballads are similar in many ways but differ slightly in the direct facts given. ...read more.