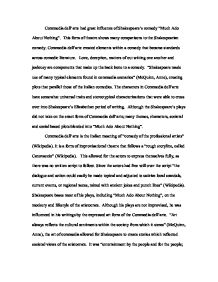 Commedia dell'arte had great influence of Shakespeare's comedy "Much Ado About Nothing". This form of theatre shows many comparisons to the Shakespearian comedy. Commedia dell'arte created elements within a comedy that became standards across comedic literature. Love, deception, matters of out witting one another and jealousy are components that make up the back bone to a comedy. "Shakespeare made use of many typical elements found in commedia scenarios" (McQuinn, Anne), creating plots that parallel those of the Italian comedies. The characters in Commedia dell'arte have somewhat universal traits and stereotypical characterizations that were able to cross over into Shakespeare's Elizabethan period of writing. Although the Shakespeare's plays did not take on the exact form of Commedia dell'arte; many themes, characters, societal and social based plots blended into "Much Ado About Nothing". Commedia dell'arte is the Italian meaning of "comedy of the professional artists" (Wikipedia). It is a form of improvisational theatre that follows a "rough storyline, called Canovaccio" (Wikipedia). This allowed for the actors to express themselves fully, as there was no written script to follow. ...read more.

"Much Ado About Nothing" could of end up as a potential tragedy with the unjust and false accusations of Hero. But instead of having a tragic ending, hero will "die to live" (Shakespeare 72), as for her innocence will be proven and a true comedy will prevail with its happy ending. The familiar "courtship is the staple activity in the comic drama" (Snyder, Susan-session 4). With this' comes deception, jealously, and the play on wits which usually results in most of comic relief in Much Ado About Nothing. "Commedia dell'arte was concerned mostly with disgraceful love intrigues, clever tricks to get money or outwit some simpleton" (Fletcher, Martha). This statement reflects closely to "Much Ado About Nothing", with its plot almost solely related to the uses of wit and the scheming of courtships. Commedia dell'arte not only produced stock storylines and plots, but also general stock characters which were found having similar qualities of the characters in Shakespeare's "Much Ado About Nothing". A stock character is "a fictional character that relies heavily on cultural types or stereotypes for its personality, manner of speech, and other characteristics" (Wikipedia). ...read more.