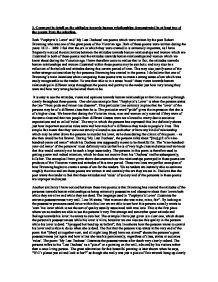 Comment in detail on the attitudes towards human relationships demonstrated in at least two of the poems from the selection.

By looking at the possessive pronouns used twice within this line we are able to see how this persona actually wants to 'own' his lover which is not the sort of quality usually associated with true love. This is the first place where we as readers are able to see the persona's very first strange and somewhat queer attitude and feelings towards his lover: he wants to own her. The example I have just given is a clear one, which shows the persona's possessiveness while his lover is alive, however we can also see this quality in the persona while his lover is dead. "I propped her head up as before"; this line shows how the persona wants to control his lover and is able to do so when she is dead. The fact that the persona also states at the very end of the poem that "[they] sit together now, and all night long [they] have not stirred" shows the persona's great possessiveness yet again and how at last she was his permanently, regardless of class, status or societies 'rules'. The poem 'My Last Duchess' illustrates the possessiveness after death very clearly indeed. ...read more.

As we find out later on in the poem, this great jealousy is actually what causes him to in the end kill her. A line that could be considered as one example of jealousy from the persona in 'Porphyria's Lover' is on line 27, "Nor could to-nights gay feast restrain". This line implies that the persona may be envious about the fact that his lover went to a feast maybe instead of coming to see him straight away. Jealousy is an obvious quality shown by both of these persona's, however is also a quality in humans which lives on even today which still leads people to do terrible and things like the things these persona's do. I feel that these sorts of attitudes are also ones which Browning wants us to recognise as being wrong and unhealthy and ones which should positively not be associated or mixed up with love in any way at all. The particular way in which the personas refer to the women in both of these poems, I feel tells the reader a substantial amount about the relationship and attitudes between the persona and his 'lover' or 'Duchess'. The women in both of these poems are not referred to in the titles in the typical conventional way which we know. ...read more.