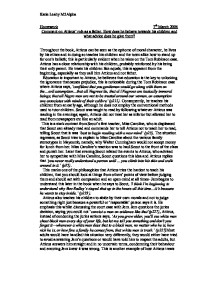 Comment on Atticus' role as a father. How does he behave towards his children and what advice does he give them?

Homework 7th March 2004 Comment on Atticus' role as a father. How does he behave towards his children and what advice does he give them? Throughout the book, Atticus can be seen as the epitome of moral character, he lives by his ethics and in doing so teaches his children and the town alike how to stand up for one's beliefs; this is particularly evident when he takes on the Tom Robinson case. Atticus has a close relationship with his children, probably reinforced by his being their only parent. He treats his children like equals, this is apparent from the beginning, especially as they call him Atticus and not father. Education is important to Atticus, he believes that education is the key to unlocking the ignorance that causes prejudice, this is noticeable during the Tom Robinson case where Atticus says, 'confident that you gentlemen would go along with them on the...evil assumption...that all Negroes lie, that all Negroes are basically immoral beings, that all Negro men are not to be trusted around our women, an assumption one associates with minds of their calibre' (p211). Consequently, he teaches his children from an early age, although he does not employ the conventional methods used to tutor children. ...read more.

Atticus treats his children with respect, and because of this they reciprocate this respect, it is not something Atticus demands, he tells this to Scout when she questions him as to why he accepted the Tom Robinson case. He says he took the case 'for a number of reasons. The main one is, if I didn't I couldn't hold up my head in town...I couldn't even tell you or Jem not to do something' (p81). This was one of the main incentives for Atticus to take the case, even though he knew there was no chance of him succeeding, he felt he had to in order to maintain his integrity and to continue to command respect from his children. Throughout the book Atticus is seen as a very liberal parent, although some characters, e.g. Aunt Alexandra, feel that he allows his children too much freedom and that he does not discipline them enough, especially Scout. Aunt Alexandra makes her opinions clear when she tells Atticus that although, 'it's all right to be soft hearted...you have a daughter to think of.'(p142) Throughout the book, Alexandra attempts to discipline Scout and to provide some 'female influence' (p133). ...read more.

This is during the Tom Robinson trial when a lynch mob arrives at the jail. Atticus narrowly escapes from harm due to the arrival of Jem and Scout, even though the situation upsets him greatly; his fingers were trembling when he folded up his newspaper, he tries to appear as normal as possible, telling Scout and Jem to go home. I think this distrust of emotions features strongly in the way he brings up his children, he fears that Scout's emotions will get her in trouble and goes to great lengths to try and teach her to conquer her outbursts. It also explains Atticus' liberality in his parenting, as he is reluctant to use emotions such as anger or fear to control his children; he attempts to conquer this reluctance by using reason so that his children can see for themselves which is the right path. Above all he teaches them to live to their own morals and not to reflect societies views, in his words; 'they're certainly entitled to think that, and they're entitled to full respect for their opinions, but before I can live with other folks I've got to live with myself. The one thing that doesn't abide by majority rule is a person's conscience.'(p111) Katie Leahy M5Alpha ...read more.