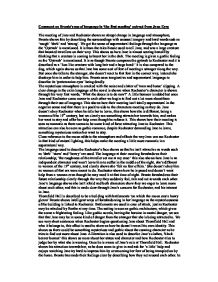 Comment on Bronte's use of language in 'the first meeting' extract from Jane Eyre.

Comment on Bronte's use of language in 'the first meeting' extract from Jane Eyre The meeting of Jane and Rochester shows an abrupt change in language and atmosphere, Bronte shows this by describing the surroundings with unusual imagery and hard words such as 'rough' 'dark' and 'strong'. We get the sense of supernatural feelings through the language as the 'Gytrash' is mentioned. It is from the tales Bessie used to tell Jane, and was a large creature that haunted travellers on their way. This shows us how Jane is almost scaring herself by thinking that a creature is coming to haunt her in the dark. The meeting is given a gothic feeling as the 'Gytrash' is mentioned. It is as though Bronte compares the gytrash to Rochester and it is described as a 'lion-like creature with long hair and a huge head:' it is also compared to the dog, which again shows us that Jane has some sort of fear of meeting a stranger along the way. ...read more.

The language used to describe Rochester's face shows us that he isn't attractive as words such as 'dark' 'stern' and 'heavy' are used. The language at their meeting foreshadows their relationship; 'the roughness of the traveller set me at my ease:' this also shows how Jane is an independent character and won't leave him to suffer in the middle of the night, she's different to women of the 19th century, and clearly shows she 'felt no fear of him.' She doesn't obey him as women of that era were meant to do. Rochester shows how he is proud and doesn't want help from a woman even though he may need it at that time of night. Bronte foreshadows their future relationship clearly through the way they suddenly feel, talk and act towards each other. Jane's language shows she isn't afraid and both characters show they are eager to learn more about each other, and this is made clear through Jane's concern for Rochester, and his interest in Jane. ...read more.

As Rochester is about to leave, his words have a much deeper meaning to them, he wants Jane to hurry to Hay to post the letter so she gets back to Thornfield Hall quickly. Bronte shows us how Rochester is attracted to her and is eager to see her again. 'A touch of a spurred heel made his horse first start and rear, and then bound away.' This type of language used to describe his exit creates a heroic image in our minds of the characters parting. Words like 'vanished' make it seem like a fairytale moment. Alliteration in the very last line also adds to the supernatural and dreamlike romantic affect Rochester had on Jane, as the first man to enter her life. 'Wild wind whirls away.' A simile is used to compare Rochester to the 'heath in the wilderness' Bronte ends this extract and the meeting of the characters, leaving the audience in suspense as the whole scene has a gothic but romantic feeling linked with the language and setting as we await their next meeting and the feeling that will come with it. ...read more.