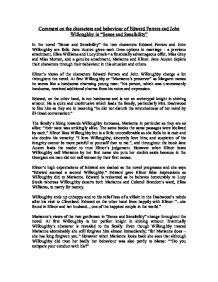 Comment on the characters and behaviour of Edward Ferrars and John Willoughby in &quot;Sense and Sensibility&quot;

Comment on the characters and behaviour of Edward Ferrars and John Willoughby in "Sense and Sensibility" In the novel "Sense and Sensibility" the two characters Edward Ferrars and John Willoughby are foils. Jane Austen gives each three options in marriage - a previous attachment, Eliza Williams and Lucy Steele< a financially advantageous offer, Miss Grey and Miss Morton, and a genuine attachment, Marianne and Elinor. Jane Austen depicts their characters through their behaviour in this situation and others. Elinor's views of the characters Edward Ferrars and John Willoughby change a lot throughout the novel. At first Willoughby or "Marianne's preserver" as Margaret names he seems like a handsome charming young man: "his person, which was uncommonly handsome, received additional charms from his voice and expression. Edward, on the other hand, is not handsome and is not an archetypal knight in shining armour. He is quite and unobtrusive which leads the family, particularly Mrs. Dashwood to like him as they are in mooning "he did not disturb the wretchedness of her mind by ill-timed conversation." The family's liking towards Willoughby increases, Marianne in particular as they are so alike: "their taste was strikingly alike. The same books the same passages were idolized by each." ...read more.

Marianne's views of Edward also change although radically as her feelings towards Willoughby. At first Marianne finds Edward dull but realises he is good for Elinor and is ready to accept him as a brother. Marianne eventually realises that although Edward did seem dull he has many other qualities and does behave honourably. Edward Ferrars and John Willoughby have very different attitudes to relationships. Edward is honourable, as he puts other people's feelings before his own. Edward is committed as he stands by Lucy Steele although he does not love her anymore. Edward understands the rules of society in the Georgian era unlike Willoughby who disobeys all societies' rules and does as he pleases; Willoughby seduces Eliza Williams leaving hr pregnant and destitute with no means of contacting him. This was against all the social morals of his time and our time. Edward, whilst staying at Norland falls in love with Elinor and is very tempted by her, but Edward unlike Willoughby is sensitive to other people's feelings. Edward is aware of society's conventions and he realises that spending to much time with Elinor without being engaged would ruin Elinor's reputation so he draws back. ...read more.

Willoughby, on the other hand, marries for money: "it had been for some time my intention to re-establish my circumstances by marrying a woman of fortune." Willoughby needed money because in the Georgian era a gentleman's independence relied on their wealth. Edwards fortune depend s entirely on the will of his mother and likewise Willoughby depends on the will of Miss Smith. Both Mrs Ferrars and Miss Smith try to use money to control the behaviour of Edward and Willoughby. Mrs Ferrars wants Edward to marry Miss Morton and break his engagement with Lucy Steele, Miss Smith however is trying to make Willoughby behave honourably and marry Eliza Williams but to no avail. At first the reader is given very different first impressions of Willoughby an Edward. Willoughby is the romantic hero, he is handsome has an infectious enthusiasm. Edward however is reserved, not handsome and is not a hero. We are taught by this not to judge on first impressions. Edward and Willoughby are both gentlemen in the same social class anticipating their independence. However through their characters and behaviour Jane Austen depicts Edward and Willoughby as tow very different people. ...read more.