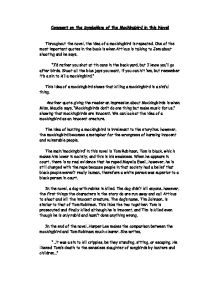 Comment on the Symbolism of the Mockingbird in this Novel

In the end of the novel, Harper Lee makes the comparison between the mockingbird and Tom Robinson much clearer. She writes, "...it was a sin to kill cripples, be they standing, sitting, or escaping. He likened Tom's death to the senseless slaughter of songbirds by hunters and children..." Another character that can be compared to a mockingbird is Arthur Radley. The people of Maycomb treat him as an outsider because he once got into a bad group of people and had never came out of the house since. He has become a myth to them; the townspeople create stories of how he creeps around at night and peers into windows when people are asleep. Poor Arthur, who is innocent, is obviously too timid to go outside when there is a crowd but only goes out when he is sure no-one sees him, but he proves them all wrong when he saves the lives of Jem and Scout. ...read more.

Because they sing, it makes mockingbird easier to shoot at. In a way, a mockingbird singing is like someone expressing his or her views. Throughout the novel, Atticus expresses his opinion on everything and even goes against society to defend an innocent man who had become an outcast because of lies. Because of this, Atticus is laughed at and mocked by all of his friends and even family; however, others who believe the same thing but don't stand up for what they believe to be right are not persecuted. In conclusion, I believe that there are many qualities a person can possess to make themselves a mockingbird, and in this novel the moral is that "it is a sin to kill a mockingbird". There are many 'mockingbirds' in our everyday lives, they don't do wrong or harm anyone, however, they are still harassed. Harper Lee is telling the reader that it is wrong to bother and hassle some who is a 'mockingbird', and I believe she is very right! ...read more.