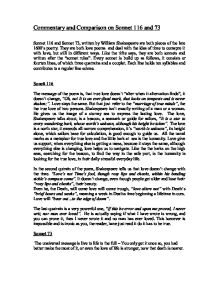 Commentary and Comparison on Sonnet 116 and 73.

Commentary and Comparison on Sonnet 116 and 73 Sonnet 116 and Sonnet 73, written by William Shakespeare are both pieces of the late 1600's poetry. They are both love poems and deal with the idea of time to comapre it with love, but still in different ways. Like the titlte says, they are both sonnets and written after the "sonnet rules". Every sonnet is build up as follows, it consists or fourten lines, of which three quatrains and a couplet. Each line holds ten syllables and contributes to a regular line schme. Sonett 116 The message of the poem is, that true love doesn't "alter when it alternation finds", it doesn't change, "Oh, no! It is an ever-fixed mark, that looks on tempests and is never shaken;". Love stays the same. But that just refer to the "marriage of true minds", the the true love of two persons. Shakespeare isn't exactly writing of a man or a woman. He gives us the image of a stormy sea to express the lasting love. ...read more.

Love will "bear out...to the edge of doom". The last quatrain is a very powerful one, "If this be error and upon me proved, I never writ, nor man ever loved". He is actually saying if what I have wrote is wrong, and you can prove it, then I never wrote it and no man has ever loved. This however is impossible and is ironic as you, the reader, have just read it do it has to be true. Sonnet 73 The unsiversal message is live to life to the full - You only get it once so, you had better make the most of it, or even the love of life is stronger, now that death is nearer. The first qutrain of Shakespeare's sonnet contains a great deal of imganery referring to nature. He compares aging process to the " yellow leaves" of winter when "none, or few do hang" In the second qutrain the period of time is shorter. The first one began with the akte autum or winter, but now it has changed to day/nigth. ...read more.

The sonnet ends with a deceptively simple rhyming couplet. The first word of this couplet refers of the poet's youth nad passion. The couptel renwes the speaker' plea for the young man's love, urging him to "love well" that which he must son leave. Shakespeare may have written this poem for a close friend as he uses the wod "thou" which indicates that he had known the person very well. It seems as if Shakespeare wrote this poem to prepare the reader, not for the approaching literal death of his body, but for the metaphorical death of his youth and passion. The friend he is talking muste be a lot younger than he. Another aspect of the poem is the diminution of the time concept, qutrain by qutrain. First a year, and the final session of it, then only a day, and the stretch of it; then just a fire, built for the part of the day; and the final minutes of it. When you compare these two sonnets, both sonnets are using love in comparison to death and both sonnets give us a imige that ist natrual. They are both about love and that love doesn't change with the time, it is even stronger. Judith Hollmann, Lower 6th ...read more.