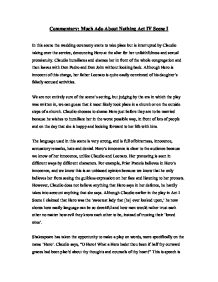 Commentary: Much Ado About Nothing Act IV Scene I

Commentary: Much Ado About Nothing Act IV Scene I In this scene the wedding ceremony starts to take place but is interrupted by Claudio taking over the service, denouncing Hero at the altar for her unfaithfulness and sexual promiscuity. Claudio humiliates and shames her in front of the whole congregation and then leaves with Don Pedro and Don John without looking back. Although Hero is innocent of this charge, her father Leonato is quite easily convinced of his daughter's falsely accused activities. We are not entirely sure of the scene's setting, but judging by the era in which the play was written in, we can guess that it most likely took place in a church or on the outside steps of a church. Claudio chooses to shame Hero just before they are to be married because he wishes to humiliate her in the worst possible way, in front of lots of people and on the day that she is happy and looking forward to her life with him. The language used in this scene is very strong, and is full of bitterness, innocence, accusatory remarks, hate and denial. ...read more.

Claudio's vision of Hero's dishonour is no less surreal than the love he had for her before he found out what she had allegedly done. In Act III Scene II Don John manages to lead on Don Pedro and Claudio to think that Hero has been unfaithful. As well as showing how words can be so deceiving, the scene also shows the importance of women (or rather the lack of importance) that women had in Shakespeare's time. Claudio and Don Pedro both know of Don John's evil ways, but they both choose to believe him over Hero. One of the themes shown in this scene is gender roles. Another example containing this theme is the reaction of Leonato when he is told of Hero's supposed 'unfaithfulness'. Leonato expresses a desire to kill himself in line 107 "Hath no man's dagger a point for me?" This shows that Leonato is more concerned for himself, his status and dignity among other men, than for his daughter, he has little concern for Hero's feelings, and is more preoccupied with his own reputation. Later on in the scene this is emphasised with the language he uses when describing his feelings on the matter. ...read more.

They are all so blinded by the appearance of being honourable and having dignity, that they cannot see that what they are doing by believing Don John's accusations is the most dishonourable act. Don Pedro supports Claudio's accusations and backs him up by twisting Hero's answer. Claudio asks her, "Now if you are a maid, answer to this." Hero answers by saying that she talked to no man the previous night. Don Pedro then goes on to say, "Why, then you are no maiden." Don John also backs up Claudio by hypocritically saying that he regrets her "much misgovernment." In line 70, Claudio says, "Are our eyes are own?" This is deeply ironic as the scene is about self-deception. His own eyes have deceived him when he thought he saw Hero betraying him. The theme of deception can be linked to many different scenes in the play. Claudio is yet again deceived later on in the play, but this time not by Don John, but by Hero who pretends to be dead. A strong link to the title is made here. I think that the title refers mainly to this scene. The chaotic scenario that has been created, has been created from false accusations, events that never happened, hence the title 'Much Ado About Nothing.' ...read more.