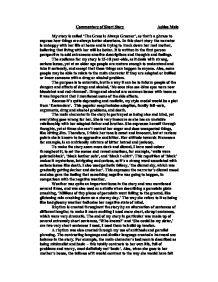 Commentary of Short Story Ashlee Male My story is called 'The Grass is Always Greener', as that's a phrase to express how things are always better elsewhere. In this short story the narrator is unhappy with her life at home and is trying to track down her real mother, believing that living with her will be better. It is written in the first person perspective to add extraneous emotive descriptions and thoughts and feelings. The audience for my story is 15-18 year-olds, as it deals with strong, serious issues, yet at an older age people are mature enough to understand and take it seriously, and accept that these things can happen to anyone. Also, some people may be able to relate to the main character if they are adopted or bullied or know someone with a drug or alcohol problem. The purpose is to entertain, but in a way it can be to inform people of the dangers and effects of drugs and alcohol, 'his once nice sea-blue eyes were now bloodshot and red-rimmed'. Drugs and alcohol are common issues with teens so it was important that I mentioned some of the side effects. ...read more.

The end of my story in particular was made up of several extremely short sentences, 'Who knows?' and 'She could be my sister,' are two very short sentences I used, I used them to build up tension. A rhythm was also created through my use of antithesis and parallel phrasing. The contrasting language and similar language created a harmonious balance in the story. For example, the main character's bedroom is described as being minimalist and basic - this totally contrasts to her own life, full of problems and worry, most definitely not 'basic'. Also, when she goes to her mother's house, the tallness of it would contrast to the way she would have felt very small. There's also parallel phrasing, as she describes the house as being daunting, in comparison with the daunting situation she was in. I used similes wherever possible, 'she always had boys trailing after her like drooling puppy dogs'. I used this to emphasise how stunning Francesca was, and I referred to boys as puppies, as puppies follow people they are fond of and drool when they want something. ...read more.