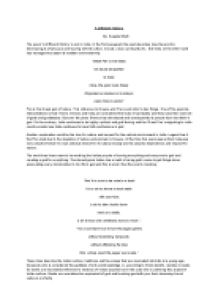 ﻿A Different History By- Suajata Bhatt The poem ?A Different History? is set in India. In the first paragraph the poet describes how the world is developing at a fast pace and leaving behind culture, morals, value, spirituality etc. But India on the other hand has managed to sustain its tradition and modernity. ?Great Pan is not dead; he simply emigrated to India Here, the gods roam freely Disguised as snakes or monkeys; every tree is sacred? Pan is the Greek god of nature. This reference to Greece and Pan could refer to two things. One of the possible interpretations is that- Rome, Greece and India are considered the hubs of spirituality and they have their own set of gods and goddesses. But over the years Greece has developed and consequently its people have lost faith in god. On the contrary, India continues to be highly spiritual and god fearing and the ?Great Pan? emigrating to India could connote how India continues to have faith and believe in god. Another explanation could be the love for nature and respect for the natural environment in India. Legend has it that Pan died due to the depletion of nature and animals in Greece. ...read more.

?Which language has not been the oppressor?s tongue? Which language truly meant to murder someone? And how does it happen that after the torture, after the soul has been cropped with a long scythe swooping out of the conqueror?s face- the unborn grandchildren grow to love that strange language.? I feel that the transition from the first paragraph to the second is not very good as the connection between the two themes is not evident. In my opinion the connection is that she is drawing a parallel between the pre- British India and the colonised India. She is using the English language as a representation of the colonised India and how it forgot or was made to forget its culture in the name of a ?better future? and ?development?. Here, she refers to them as ?oppressors?, ?murderers?, but murderers of what? In my opinion murder in this context refers not just to taking lives but also the murder of spirits, souls and more relevantly cultures and customs. She seems to be blaming the British for the loss of the culture, customs, values, morals and in this case language as well. ...read more.

This poem was written in the post colonial period. At a time when India was finding its bearings in the world. It was a time when India was still hung over from the British rule but at the same time it played the rebellious teen and tried to fight the natural course of things. When your country has been ruled by foreigners, colonisers for as many as three hundred years there are bound to be an influence on the country. The British ruled over many many generations of Indians and after a point of time the British way of living and approach in general started seeming normal to the Indians and they began to follow it. When the British left India in 1947 the youth were in an awkward predicament while they wanted to revive their culture and their lifestyle they continued to be westernised. Sujata Bhatt continuously emphasises the importance of a national identity not only in this poem but throughout. A national identity is what defines you globally. On the world map it is not the people who are visible it is the countries. Outside your territory your country plays a major part in your identity. The poet says that if you lose your native habits, morals, values and culture your identity is depleted. 1. Arjun Nayar 9C ...read more.