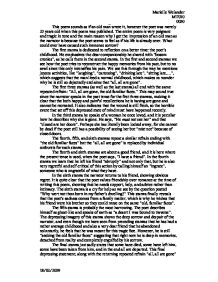 Commentary on The old familiar Faces by Charles Lamb

Commentary on "The old familiar Faces" by Charles Lamb This poem sounds as if an old man wrote it, however the poet was merely 23 years old when this poem was published. The entire poem is very poignant and tragic in tone and the main reason why I get the impression of an old man as the narrator is because the poet seems to feel as if his life is already over. What could ever have caused such immense sorrow? The first stanza is dedicated to reflection on a better time: the poet's childhood. He emphasizes the dear companionship he shared with "bosom cronies", as he calls them in the second stanza. In the first and second stanzas we see how the poet tries to reconstruct the happy memories from his past, but to no avail since this only intensifies his pain. We see this through the way he mentions joyous activities, like "laughing", "carousing", "drinking late", "sitting late....", which suggests that the man lived a normal childhood, which makes us wonder why he is still so dejectedly exclaims that "all, all are gone". ...read more.

The fourth and sixth stanzas are about a good friend, and it is here where the present tense is used, when the poet says, "I have a friend". In the fourth stanza we learn that he left his friend "abruptly" and not only that, but he is also very regretful and self-critical of this action by calling himself an "ingrate", someone who is ungrateful of what they have. In the sixth stanza the narrator returns to his friend, showing obvious regret. It is quite clear that the poet values friendship over romance at the time of writing this poem, showing that he needs support, help, and advice rather than intimacy. The sixth stanza is a cry for help as we see by the question posted "Why wert not thou born in my father's dwelling?" This stanza finally reveals that the poet's sadness comes from a family matter, which is why he wishes that his friend were his brother so they could muse on the same "old, familiar faces". ...read more.

This makes the song more of a lament and enhances the effect that the narrator has given up all hope and now disconsolately settles into a routine of depression and painful reminiscence without any ambition to move on in this sad world. This poem has certain autobiographical detail, since it was written during a very tumultuous time for Charles Lamb. Charles was very close to his sister Mary and was mentally scarred when Mary one day in a fit of insanity murdered their mother with a kitchen knife. This explains who the woman he once loved was and why he "must not see her", since Mary was placed in an insane asylum after the incident. However, if I had not known of this fact as a reader my perception of the narrator was that he was pathetic, depressed, and worthy of the title of an ingrate. The morbidity of the poem is the most striking thing about it and it is peculiar how our impression of age depends on the brightness of the poems tone, or how hopeful the poet is for the future. Marielle Welander MT010 0030 18/02/2009 ...read more.