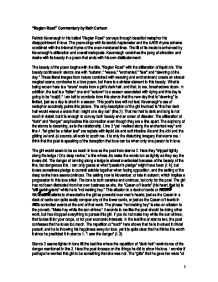 "Raglan Road" Commentary by Beth Carlson Patrick Kavanaugh in his ballad "Raglan Road" conveys through beautiful metaphor his disappointment in love. The poem sings with its iambic heptameter and the AABB rhyme scheme combined with the internal rhyme of the even-numbered lines. The lilt of its music is enhanced by Kavanaugh's alliteration and overall melopoeia. Kavanaugh combines the pang of attraction and desire with its beauty in a poem that ends with his own disillusionment. The beauty of the poem begins with the title, "Raglan Road" with the alliteration of liquid /r/s. This beauty continues in stanza one with "autumn," "weave," "enchanted," "leaf" and "dawning of the day." These literal images from nature combined with weaving and enchantment, create an almost magical scene, conducive to a love poem, but there is a sinister element to this beauty. What is being woven here is a "snare" made from a girl's dark hair, and that, to me, foreshadows doom. In addition, the leaf is a "fallen" one and "autumn" is a season associated with dying and this day is going to be "rue[d]." I am left to conclude from this stanza that the new day that is "dawning" is limited, just as a day is short in a season. ...read more.

the Queen in a deck of cards can quite easily conquer any of the lower cards, or just as the Queen of Hearts in Alice controlled events at the end of that work. The phrase "not making hay" is also an allusion to the proverb, "Make hay while the sun shines." It sounds to me like the poet should be doing other work, but has dropped everything to pursue this girl. If you do not make hay while the sun shines, that bodes ill for your crops, or for your economic interests. In the last line of stanza two, the poet confesses that he loves too much. The repetition of "such" here shows that he is involved in trivial pursuit, and he is throwing his happiness away for love; yet it is quite clear that he thinks it is worth it since he predicted it in stanza 1, "I saw the danger" (l. 3). Stanza 3 seems lighter in tone till the last line where the repetition of "dark hair" reminds me of the danger mentioned in line 3. Here the poet focuses on the things he did to show his love. I wonder if perhaps he wanted this girl to be something that she was not. ...read more.

There is no possibility of romance between clay and an angel, and likewise, there was no possibility of romance between the poet and this girl. That he tried, even, was disastrous. The result was the losing of his wings. To a poet, "wings" can be the poetic muse that lifts a poet above the mere masses of mortality. Perhaps Kavanaugh felt that this love affair cost him something as a poet. The "grief" that he predicted for himself at the "dawning of the day" (l. 4) did indeed come. In line 16 that grief is clarified as the angel losing his wings-a grief that seems far more than a fallen leaf for him in the end. Kavanaugh's poem is a warning to anyone who thinks they are in love. It seems to me to also be advice in love: that one should love someone who is on the same plane, so to speak. One who loves art needs to find a lover who can appreciate the gifts of art rather than be swept up in the other's appearance, something like "dark hair," a flimsy, physical thing that is a deadly snare. At the same time, the sadness of the poem doesn't feel like the most significant thing about it. I find the beauty of the poem to be predominant and can conclude that even misguided love has its loveliness and is worth having as memory. ?? ?? ?? ?? 1 ...read more.