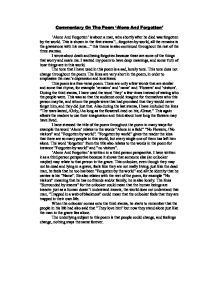 Commentary On The Poem 'Alone And Forgotten'.

Commentary On The Poem 'Alone And Forgotten' 'Alone And Forgotten' is about a man, who shortly after he died was forgotten by the world. This is shown in the first stanza "...forgotten by world, all the remains is the gravestone with his name..." this theme is also continued throughout the rest of the three stanzas. I wrote about death and being forgotten because these are some of the things that worry and scare me. I wanted my poem to have deep meanings, and some truth of how things are in this world. The tone that I have used in this poem is a sad, lonely tone. This tone does not change throughout the poem. ...read more.

Also during the last stanza, I have included the lines "The tears lasted, /Only, /As long as the flowers/Lived on his, /Grave." This again allows the readers to use their imagination and think about how long the flowers may have lived. I have stressed the title of the poem throughout the poem in many ways for example the word 'Alone' relates to the words "Alone in a field" "No Flowers, / No visitors" and "Forgotten by world". "Forgotten by world" gives the reader the idea that there are so many people in this world, but every single one of them has left him alone. The word 'forgotten' from the title also relates to the words in the poem for instance "Forgotten by world" and "no visitors". ...read more.

He also relates with the rest of the poem, for example "No visitors" meaning that he has no friends and/or family, he is also lonely. The lines "Surrounded by insects" for the onlooker could mean that the human beings are insects- just as a human doesn't understand insects, the world does not understand that man, "Trapped in a web of blackness" could mean that the onlooker feels that they are trapped in their own life. When the onlooker comes onto the third stanza, he starts to remember that the people in his life had also said that "They love him" but now they stand alone just like the man in the grave lies alone. The underlying subject to this poem is that people could change, and feelings change, nothing stays the same forever. ...read more.