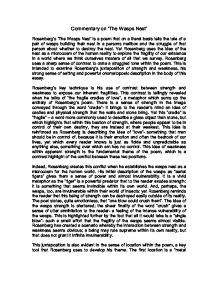 Commentary on 'The Wasps Nest'

Commentary on 'The Wasps Nest' Rosenberg's 'The Wasps Nest' is a poem that on a literal basis tells the tale of a pair of wasps building their nest in a persons mailbox and the struggle of that person about whether to destroy the nest. Yet Rosenberg uses the idea of the nest as a microcosm of the human reality to explore the fragility of our existence in a world where we think ourselves masters of all that we survey. Rosenberg uses a sharp sense of contrast to crate a struggled tone within the poem. This is intended to examine Rosenberg's juxtaposition of strength and weakness, his strong sense of setting and powerful onomatopoeic description in the body of this essay. Rosenberg's key technique is his use of contrast between strength and weakness to expose our inherent fragilities. This contrast is tellingly revealed when he talks of "the fragile cradles of love", a metaphor which sums up the entirely of Rosenberg's poem. There is a sense of strength in the image conveyed through the word "cradle"- it brings to the reader's mind an idea of castles and physical strength that the walls and stone bring. Yet this "cradle" is "fragile" - a word more commonly used to describe a glass object than stone, but which highlights that ...read more.

The first location is a "metal hold", which seems like a place of strength, simply because of the fact it is made of metal, something which seems impervious to harm. But this setting of strength becomes one of weakness; the nest is built of "paper and mud". Within the reader's world, these are fundamentally fragile; both mud and paper seem so easily manipulated. The strength of the "metal hold" is reduced; what seems so solid is actually "insubstantial"- something which barely exists. It is a reminder through place of the conflict between strength and weakness. It is also an idea that becomes more explicit when Rosenberg talks of it as the wasps "home". A "home" has an implicit idea of strength; it is a place where, the reader fells, that inhabitant is the master of their own universe, because it is a "home". The word has an intangible power; yet it is a quality tempered, because it is built from "paper and mud". The wasps may be the master of its domain; but to us, its domain is fundamentally weak. This sense of differing power in differing scales is reinforced when Rosenberg identifies himself with the wasps' situation, sensing his own vulnerabilities as he lives "in an alien and gigantic universe". ...read more.

Their strength within their nest is highlighted through the adverb "savagely" tends to describe powerful violence, which is often equated with strength. The wasps recognise their weakness but continue; they do not "bother to attend" to the danger that they are in. The sense of indifference and nonchalance of this image that seems more to mortal danger is the final recognition of this hope. Recognise the vulnerabilities, but continue; and the poet identifies within the wasps a human response to the danger. Understand the danger, but do not let it define a life. By the end, the poet has recognised this connection between the reality of the wasps and humans that extends beyond our inherent weaknesses. Thus, 'The Wasps Nest' is a poem that explores the conflict between strength and weakness using the realities, dangers and response of wasps as a microcosm for the human world. It is a poem of contrast and illusion, where apparent strength becomes weakness. But is it also a very human poem. It studies the mirage of strength that we portray around ourselves and sees within this image the fragilities of man. It is a poem of our lives and reality within Rosenberg's words. It is a poem of the human condition that illuminates ourselves and with which Rosenberg shows a profound truth of our existence. ...read more.

The essay writer analyses the poem very carefully here to determine its purpose and its message. S/he particularly examines the parallels drawn between the insect and human worlds, reflecting on the fragility of our own existence. There is a repeated error in replacing the word "citadel" in the poem with "cradle" but the writer makes the correct associations with citadel/castle and this could have arisen from a spelling check error. The introduction and the conclusion are clearly expressed and informative about the intentions and findings of this study.

Paragraph and sentence construction are well managed throughout, with strong command of phrasing and well-chosen lexis.