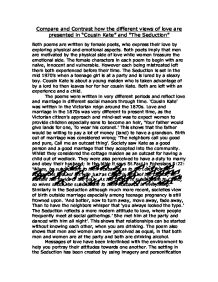 Both poems are written by female poets, who express their love by exploring physical and emotional aspects. Both poets imply that men are motivated by the physical side of love while women treasure the emotional side. The female characters in each poem to begin with are naïve, innocent and vulnerable. However each being mistreated left them both experienced before their time. The Seduction is set in the mid 1970’s when a teenage girl is at a party and is lured by a sleazy boy. Cousin Kate is about a young maiden who is taken advantage of by a lord ho then leaves her for her cousin Kate. Both are left with an experience and a child.

The poems were written in very different periods and reflect love and marriage in different social manors through time. ‘Cousin Kate’ was written in the Victorian reign around the 1870s. Love and marriage in the 1870s was very different to present time, as the Victorian citizen’s approach and mind-set was to expect women to provide children especially sons to become an heir, ‘Your father would give lands for one, To wear his coronet.’ This shows that the father would be willing to pay a lot of money (land) to have a grandson. Birth out of marriage was considered wrong; ‘The neighbors call you good and pure, Call me an outcast thing’. Society saw Kate as a good person and a good marriage that they accepted into the community. Whilst they considered the cottage maiden as an outcast for having a child out of wedlock. They were also perceived to have a duty to marry and obey their husband; in the bible it says St.Paul in Ephesians 5:22: ‘Wives, be subordinate to their husbands as to the Lord. For the husband is head of his wife just as Christ is head of the church, he himself the savior of the body. As the church is subordinate to Christ, so wives should be subordinate to their husbands in everything.”’ Similarly in the Seduction although much more recent, societies view of birth outside marriage especially among teenage pregnancy is still frowned upon. ‘And better, now to turn away, move away, fade away, Than to have the neighbors whisper that ‘you always looked the type.’

The Seduction reflects a more modern attitude to love, where people frequently meet at social gatherings.’ She met him at the party and danced with him all night’. This shows that relationships can be started without knowing each other, when you are drinking. The poem also shows that men and women are now perceived as equal, in that both men and women are at the party and both are drinking alcohol.

Messages of love have been interlinked with the environment to help you portray their attitudes towards one another. The setting in the Seduction has been created by using imagery and personification which helps the reader to envisage the scene. ‘Far from the blind windows of the tower blocks.’ This could imply that no one is there to see what could happen or that no one cares.  An industrial dock yard is not a nice place to be and most probably not many people go there. ‘Towards the frightening scum on the water’, because this setting is so unromantic it implies that the sleazy boy is only after one thing. ‘She chattered on, and stared at the water, The Mersey, green as a septic wound.’ Here the author has used a simile to help explain nervousness of the girl. These words are effective because it emphasizes her innocents, although it seems to be dark and ery.

The opening of ‘Cousin Kate’ tells us that she is just a simple country girl working to live. ‘I was a cottage maiden Hardened by sun and air, Contented with my cottage mates,’. Having this opening shows the emphasis of her innocents and it gives us a small idea of who she is. The author Christina Rossetti has pieced together a small picture of what her life was like but tells you enough for you to finish the scene in you mind. This all changes when later on it contrasts with the mention of her cousin Kate and the new lords. Both poets have used the environment help them create an image and an atmosphere which when added to the dramatic monologue is very effective. Also it transfers the feelings and emotions from the character to the reader.

The poets have both used a range of techniques to help present the atmosphere and attitude to love. The atmosphere at the beginning of ‘The Seduction’ is quieting down after leaving a party with a random person who has got her drunk. It slowly turns into a dark and depressing mood but the girl is excited, naïve and unaware. The poet has used words like ‘she giggled’ and ‘he muttered’. This is successful as it shows the contrast between the innocent girl and the sinister boy. At the end of the poem the atmosphere has changed to a despaired attitude this shows how the poets view has changed. The emphasis of the change is described using poetic techniques like Connotation, Imagery, Oxymoron’s and alliteration. ‘And a bag filled with shimmering, sweet paint thinner.’ This implies that the boy was going off to get high when he is meant to be at school, I have chosen this quote also as an example of imagery and alliteration.

Similarly the beginning of ‘Cousin Kate’ is peaceful, illustrated though words such as ‘contended’, ‘care’ and ‘flaxen’. However later on in the poem the narrators’ feelings are mixed; ‘Even so I sit and howl in the dust’ shows that she does feel sorrow and the reader can empathise with her. Also the poet has used dust to create a sad atmosphere. Whereas she perceives her cousin as wealthy and happy; ‘You sit in gold and sing’. This gives contrast from poor and rich, sorrow and joy. The narrator is also angry with the lord, ‘I would have spit in his face’. This illustrates her anger towards him, which creates tension and increases the reader’s knowledge of the narrator.

Another way the poets express their attitudes to love and marriage is through the relationships between men and women. ‘Cousin Kate’ suggests the role of the men in the Victorian society were much more superior to women as they are the ‘hunters and gatherers’. By this I mean that the men are the leaders and are loved by women and the women should do as they are told. Conversely the male in the poem is not seen as likeable character, ‘He lured me to his palace home’. The word ‘lured’ projects an image of an ungentlemanly character which has falsely persuaded the victim. This is effective as he treats her as she is an object; ‘He changed me like a glove’. Equally ‘The Seduction’ the male character is perceived as someone who is not a pleasant person and a bad influence, ‘He spat into the river’. This is valuable as it illustrates how shocking and uncouth the boy is. Eileen McAuley has used verbs to convey the actions of the characters in ‘The Seduction’; for example the girl’s movements are submissive toward the strong minded boy. Although the same as ‘Cousin Kate’ the women in that period of time are meant to be submissive to their ‘master’. Consequently both poems are exploring the role of women in relationships and despite the fact that there is over a hundred years between the poems they both seem to be implying that society still criticise young mothers. Although the men are described as sleazy and sinister, this could be a miss conception as these may be the views from a women perspective. These descriptions of the male characters are portrayed as a stereotypical chauvinist male and could be offensive from a mans point of view.

Finally the two poets have used the structure to help represent the theme of love. Both poems are written in stanzas and each tells another part of the story. ‘Cousin Kate’ is set out in a very traditional manner which help you to grasp the thoughts and emotions of the narrator. It repeats certain words in the first person like ‘I’, ‘he’ and ‘you’ this is done to show the difference between the characters but mostly cousin Kate and the narrator because ‘Kate’ has stolen the narrators ‘man’ (father); also because of the style it has created the piece of writing to be a dramatic monologue. Similarly ‘The Seduction’ also uses a lot of repetition of words in the third person like ‘she’ and ‘he’ this helps to show that it is a narrative. The poem is almost split into two sections; the fir half concentrates on the build up to when she discovers that she is pregnant and the second half only talks about if only it had not happened; also the first half is showing her innocents forming into an experience. This is successful because she is a young girl who still day dreams and wishes to be out with her friends; ‘Day trips to Blackpool, jumping all the rides?’ McAuley has also used a rhetorical question as if to say should she be out with her friends or does she get what she is deserved; but then it carries on to question what does the girl deserve?

I believe that there is a subliminal message beyond the words and technical styles of writing, in both poems which can be related to the present time. The most obvious one is not to be naive and fall for boys tricks. However boy tricks are not always bad and good things may come of it. I consider the most successful technique is not a poetic technique, but more the structure the poets have written them in because it creates the mood, the speed and most of all in my eyes the tension and suspense.