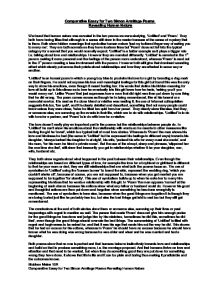 Comparative Essay for Two Simon Armitage Poems Revealing Human Nature We found that human nature was revealed in the two poems we were studying, 'Untitled' and 'Poem'. They both have boring titles that although in a sense still draw in the reader because of the sense of mystery that is there. Both show hidden meanings that symbolise human nature 'just my buttered finger way of asking you to marry me'. They are both sonnets as they have fourteen lines but 'Poem' does not fall into the typical category for a sonnet that you would normally expect. 'Untitled' is a better example as it plays a bigger role i.e. talking about love and relationships. However they are narrated differently. 'Untitled' is narrated in the 1st person making it more personal and the feelings of the person more understood, whereas 'Poem' is read out in the 3rd person creating a less involvement with the person. However both still give that dominant sounding effect which clearly put across their points about relationships and how they are affected in some way or another. ...read more.

'Untitled' is to do with love for a partner, and 'Poem' is to do with love for a relative. The love doesn't really play an important part in the poems but the relationships between people do. In 'Untitled' he can't show his emotions about the relationship with words so he resorts to other measures like hurting the girl he 'loved', which is a typical trait of most love stories. Whereas in 'Poem' the man shows his love and kindness he had (the same in 'Untitled' but he expressed his feelings in different ways) towards his daughter, 'always tucked his daughter in at night', his wife, 'praised his wife for every meal she made', and his mum, 'for his mum he hired a private nurse'. But the use of the abrupt, sharp end phrases, 'slippered her the one time she lied', still show that insecurity you get in relationships whether it be your daughter, son, wife, husband etc. They both show regrets about what happened in the past between their relationships. Even though the relationships are based on different types of love, for example the love for a boyfriend or girlfriend is different to that for your mum or dad, they are still relationships that are what both the poems focus on. ...read more.

The person that reads 'Poem' does not give him enough praise for the good things he has done and judge him by his mistakes, 'sometimes he did this, sometimes he did that', even though the good things should overrule the bad things. The summarising of 'Untitled' is filled with regret and forgiveness to be asked for, and that it was his age that made him act the way he did. This shows that he had an excuse for his actions, whereas in 'Poem' he should have no excuse because he should have known what he was doing was wrong because he was older and wiser and he was married and had a daughter. Both poems show that no one is perfect and that humans behave instinctively towards love and relationships and build on that to produce something more, i.e. the marriage proposal. And that humans thrive on love and attention and that need to be wanted, but when they do something good they are put down for something wrong they have done. It shows that life is life and it can be plain and boring thus making it predictable and the outcomes known. Siobhan Maine 10R Comparative Essay for Two Simon Armitage Poems Revealing Human Nature ...read more.