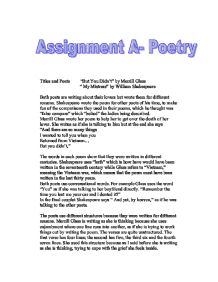 Titles and Poets "But You Didn't" by Merrill Glass " My Mistress" by William Shakespeare Both poets are writing about their lovers but wrote them for different reasons. Shakespeare wrote the poem for other poets of his time, to make fun of the comparisons they used in their poems, which he thought was "false compare" which "belied" the ladies being described. Merrill Glass wrote her poem to help her to get over the death of her lover. She writes as if she is talking to him but at the end she says "And there are so many things I wanted to tell you when you Returned from Vietnam... But you didn't," The words in each poem show that they were written in different centuries. Shakespeare uses "hath" which is how have would have been written in the seventeenth century while Glass refers to "Vietnam," meaning the Vietnam war, which means that the poem must have been written in the last thirty years. Both poets use conversational words. For example Glass uses the word "You" as if she was talking to her boyfriend directly. "Remember the time you lent me your car and I dented it?" ...read more.

Shakespeare makes fun of this by saying if white describes the colour of snow then his Mistress has brown, sun touched skin because no one literally has skin the colour of snow. In "But You didn't," the poet writes as if talking to her boyfriend. The first three verses create images of different times in their relationship where she behaved badly but he always forgave her. "Remember the time I forgot to tell You the dance was formal. And you Came in jeans? I thought you'd hate me... But you didn't". In this verse you get a picture of how it would feel to go to a big formal dance in jeans when everyone else would be wearing tuxedoes and long, fancy dresses. He might not have hated her but he must have loved her a lot if he didn't get angry enough to look as if he hated her. The two poets choose structures that suit the reasons for writing them, but in both poems the reasons are not clear until you come to the end. Merrill Glass sounds as if she is writing to her boyfriend to tell him that she knows he put up with a lot from her. ...read more.

I have never read a Shakespearean sonnet before so I found it difficult to relate to and decipher the language into out present day speech. This makes it difficult to relate it to other poems. The poem "My Mistress" has a little humour in it and I liked the way he described music having a more pleasing sound than her voice. When reading through the poem "But You Didn't", I felt the girl was always doing things to the boy, and that he never retaliated. I guess it was because he loved her and I suspected that the girl did not realise this until it was too late. Although I feel the boy should have shown his true feelings towards the girl and told her that he did indeed love her. I never expected the poem to end in the way it did; it shocked me because it was abrupt and final. This ending saddened me and it took me a minute to two to realise that he had died. If I had to pick a favourite poem, I would choose " But You Didn't", by Merrill Glass as she made one have feeling for her work by talking through her emotions in this way. She certainly got a reaction from me, because she expressed emotion and feeling and it takes a lot of guts and confidence to do this. By Sam Nutt 11A ...read more.