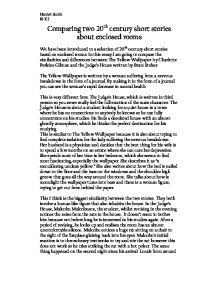 Comparing two 20th century short stories about enclosed rooms We have been introduced to a selection of 20th century short stories based on enclosed rooms. In this essay I am going to compare the similarities and differences between The Yellow Wallpaper by Charlotte Perkins Gilman and the Judge's House written by Bram Stoker. The Yellow Wallpaper is written by a woman suffering from a nervous breakdown in the form of a journal. By making it in the form of a journal you can see the woman's rapid decrease in mental health. This is very different from The Judge's House, which is written in third person so you never really feel the full emotion of the main character. The Judge's House is about a student looking for a quiet house in a town where he has no connections to anybody he knows so he can fully concentrate on his studies. He finds a desolated house with an almost ghostly atmosphere, which he thinks the perfect destination for his studying. This is similar to The Yellow Wallpaper because it is also about trying to find complete isolation for the lady suffering the nervous breakdown. ...read more.

We as the readers have to try and put ourselves into her position to get the full effect and emotion of this as otherwise it could seem rather stupid. She starts looking forwards to spending time in the room just to observe the wallpaper. The likes the way the pattern moves because of the woman crawling around behind it. Her husband even starts sending her to the room after eating to lie down where her addiction is fed. She becomes almost obsessed with the room, as if it were alive unlike in The Judge's House where the house is just a venue for Malcolm's studies. Another difference is that in The Yellow Wallpaper, the strange goings on and sort of spirit within the house is pulling her in unlike in The Judge's House the spirit within the house is rejecting the student and not letting him get close to it. We know for definite during Malcolm's third night in residence that he is not wanted. The evening was colder so we know from that fact that this night is going to be different as coldness in ghostly stories is always going to bring the worst. ...read more.

Her husband returns and she refuses to come out of the room. She locks it and tells him to find the key outside. Meanwhile inside the room she says about how she creeps around the room. Just the same as she sees women before creeping around. Now it is like she has joined them. On the other side of the door her husband faints and she says about how now she has to creep over him. This ending really gets you asking questions and thinking about what actually happens unlike with The Judge's House where we know exactly how it ends immediately without having to ask too many questions. Personally, I think that The Yellow Wallpaper made a better story because there were more questions to be asking ourselves and more unknowns, which gets us trying to fill in those unknowns. Like being in the dark when because you don't know what is really there, your brain starts imagining all kinds of possibilities. I also thought that's because it was in the form of a journal, getting full emotions of just one person made it better. My final reason as to why I prefer it is that it didn't follow the typical clich�s of a scary story e.g. bad weather and getting warned to be careful. ?? ?? ?? ?? Harriet Smith 10 X 2 ...read more.