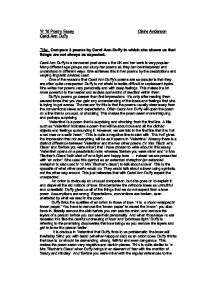 Yr 10 Poetry Essay Claire Anderson Carol Ann Duffy Title: Compare 3 poems by Carol Ann Duffy in which she shows us that things are not always as expected. Carol Ann Duffy is a renowned poet across the UK and her work is very popular. Many different age groups can study her poems as they can be interpreted and understood in different ways. She achieves this in her poems by the descriptions and varying linguistic devices used. One of the reasons that Carol Ann Duffy's poems are so popular is that they are often quite unexpected. Duffy is not afraid to tackle difficult or unpleasant topics. She writes her poems very personally and with deep feelings. This makes it a lot more powerful to the reader and evokes some kind of reaction within them. Duffy's poems go deeper than first impressions. It is only after reading them several times that you can gain any understanding of the ideas and feelings that she is trying to get across. The reason for this is that the poems usually steer away from the conventional views and expectations. Often Carol Ann Duffy will open the poem on a line that is unusual, or shocking. This makes the poem seem more intriguing and perhaps surprising. 'Valentine' is a poem that is surprising and shocking from the first line. A title such as 'Valentine' indicates a poem that will be about love and all the clich�d objects and feelings surrounding it. However, we are told in the first line that it is 'not a red rose or a satin heart.' -This is quite a negative line to start with. The 'not' gives the impression that not everything will be as it seems in 'Valentine.' Already there is a distinct difference between 'Valentine' and the two other poems ('In Mrs Tilscher's Class' and 'Before you were mine') that I have chosen to write about in this essay. ...read more.

Duffy, however uses the typical classroom image of rubbing out a mistake in your work to show how Mrs Tilscher helped the children 'erase' their fears: 'faded like the faint, uneasy smudge of a mistake.' Before the reference to 'Brady and Hindley' is made there are a lot of shushing sounds to diminish their existence: 'sweet shop', 'sugar paper', 'coloured shapes.' This again is blocking the outside world from the children's idyll. The stanza length is interesting in this poem. Unlike 'Valentine' (free verse with irregular inconsistent stanza length), 'In Mrs Tilscher's Class' has four stanzas, which makes it a blank verse poem. The first two have eight lines, compared to just seven lines for the final two verses. The reason for this being that Carol Ann Duffy presumably wanted to reflect the children's changing attitudes and developments in the change of stanza length. The final two stanzas, because they are shorter intensify the tension that is created. The tone in the first two stanzas is na�ve and innocent. This is achieved by the affectionate way that Duffy writes about Mrs Tilscher and the classroom. She emphasises all the personal touches that made her special -'she'd left a good gold star by your name.' She also, clearly loved the atmosphere in the classroom- or at least in the first two stanzas- and she manages to express this in the linguistic devices she uses: 'laugh of a bell,' 'xylophone's nonsense.' In the third stanza the children are surprisingly compared to 'tadpoles' and 'frogs' in an extended metaphor (like the one that is used throughout 'Valentine') that is used to show their rapid growth. 'Over the Easter term, the inky tadpoles changed.... Three frogs hopped in the playground.' Duffy remembers graphically when a 'rough boy' told her the facts of life. This is supposedly the time when she also began to lose her naivety that she possessed earlier in the school year (first and second stanza). ...read more.

Duffy again shows her gratitude in 'Before you were mine', this time to her mother. She is grateful for the way that her mother made her childhood exciting: 'You'd teach me the steps on the way home from mass.' This activity is stated to be happening on the 'wrong pavement'. This is possibly a hint that the mother regrets the loss of her exciting, dancing youth now that she has a 'possessive' daughter who has to be taken to mass. I think that 'Before you were mine' and 'In Mrs Tilscher's Class' are quite similar. They are both about a memory (a school classroom and a mother's life). They both have a regular layout, with varying sentence lengths. This regularity isn't emulated in 'Valentine' though. I think that the reason for this is that 'Valentine' is about a feeling (love) and the other two are about actual places and people. The language used in 'Before you were mine' is very detailed and allows us to create a clear picture of the mother's early encounters. Duffy uses a lot of positive words to bring the poem to life: 'sparkle', 'waltz', and 'laugh'. These words make a contrast to the final words: 'before you were mine.' Here we are reminded for the last time that the mother's life did not always 'sparkle'. With the arrival of a 'possessive yell' she became tied down. 'Maggie Mcgeeney and Jean Duff' were never heard of again. In 'Valentine' Duffy used a lot of ambiguities ('fierce kiss'). The same can be said for 'Before you were mine'. 'In the ballroom with the thousand eyes.' This sets a very romantic scene and could be referring to the eyes of five hundred potential suitors watching the mother-to-be dancing 'in those red high-heeled shoes.' Or it could be an innuendo to a glitter ball. This illustrates how light played on the ball, sending light across the dance floor in a 'thousand eyes.' When reading Carol Ann Duffy's poems it is advisable to be prepared for the unexpected, as this is almost certainly what you will get. ...read more.