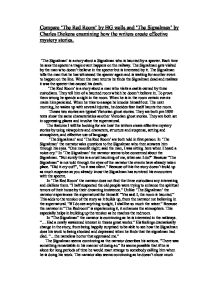 Compare The Red Room(TM) by HG wells and The Signalman(TM) by Charles Dickens examining how the writers create effective mystery stories.

Compare 'The Red Room' by HG wells and 'The Signalman' by Charles Dickens examining how the writers create effective mystery stories. 'The Signalman' is a story about a Signalman who is haunted by a specter. Each time he sees the specter a tragic event happens on the railway. The Signalman gets visited by the man who doesn't believe in the specter but is interested by it. The Signalman tells the man that he has witnessed the specter again and is waiting for another event to happen on the line. When the man returns he finds the Signalman dead and realizes it was the specter that caused his death. 'The Red Room' is a story about a man who visits a castle owned by three custodians. They tell him of a haunted room which he doesn't believe in. To prove them wrong he spends a night in the room. When he is in the room certain events make him panicked. When he tries to escape he knocks himself out. The next morning, he wakes up with several injuries, he decides fear itself haunts the room. Theses two stories are typical Victorian ghost stories. They are both pre 1900 texts show the same characteristics as other Victorian ghost stories. They are both set in oppressing places and involve the supernatural. ...read more.

The first line' "I can assure you, said I, that it will take a very tangible ghost to frighten me." This encourages the reader to keep reading straight away, as it keeps them guessing where or who this ghost is. The writer gradually develops the story line by introducing the three custodians through description and dialog. "...his decaying yellow teeth" and ...theses grotesque custodians." As they give him information about the red room it becomes clear that the narrator wants to spend the night there. "But if you go to the red room tonight, you go alone." As the narrator describes his journey to the red room mysterious arise to maintain the interest of the reader. "In which a young duke had died." The writer leaves theses questions unanswered to add to the suspense and mysterious atmosphere of the red room. In the opening of 'The Signalman' the narrator describes the actions of the Signalman when he try's to catch his attention. "Halloa! Below there!", "Instead of looking up...turned himself about , and looked down the line." This makes the reader wonder why he is looking down the line. The writer develops the storyline by the Signalman telling the narrator about the spectre and the events that happen after its appearance. ...read more.

When Holmes is at the house of the murder he describes it as "...was a grey, lickenblotched stone, with a high central portion and two carring wings, like claws of a crab..." This enhances the atmosphere as the metaphor, "claws of a crab" make the house seem evil and unnatural. When Holmes meets Dr Grimesby Roylott he describes him by saying. "A large faced, scared with a thousand wrinkles, burned yellow" This makes him seem evil and slow. This enhances the atmosphere as it leaves the reader wondering what he will say to Holmes. Suspense is created by using words such as "...deadly pale filled with horror." This adds to the suspense as it describes a person who has just been killed. The phrase "light revealed it to the victim" adds suspense as it shows that someone has died during the night and has only been discovered in daylight. Theses factors make it an effective mystery story. The writers Create mystery in 'The Red Room', 'The Signalman' and 'The Speckled Band' by considering viewpoint, structure, suspense, description, setting and atmosphere. In 'The Red Room' the setting is a castle, gloominess is suggested by the cold and dark, contributing to the atmosphere of oppression and neglect. In 'The Signalman' descriptive words are used such as, "barbarous, depressing and forbidding air." Theses a suspense to keep the reader reading. ...read more.