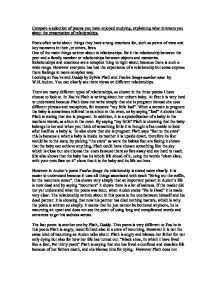 Compare a selection of poems you have enjoyed studying, explaining what interests you about the presentation of relationships.

Compare a selection of poems you have enjoyed studying, explaining what interests you about the presentation of relationships. Poets often write about things they have strong emotions for, such as points of view and key moments in their ,or others, lives. One of the main things written about is relationships. Be it the relationship between the poet and a family member or relationships between objects and memories. Relationships and emotions are a complex thing to right about, because there is such a wide range. However everyone has had the experience of a relationship but some express there feelings in more complex way. Looking at You're and Daddy by Sylvia Plath and Twelve Songs-number nine by W.H.Auden. You can clearly see there views on different relationships. There are many different types of relationships, as shown in the three poems I have choose to look at. In You're Plath is writing about her unborn baby. At first it is very hard to understand because Plath does not write simply that she is pregnant instead she uses different phrases and metaphors, for instance "my little loaf". When a women is pregnant the baby is sometimes referred to as a bun in the oven, so by saying "loaf" it shows that Plath is stating that she is pregnant. ...read more.

In Daddy Plath uses many colours. These colours show Plath's feelings, for instance "Black shoe, In which I have lived, For thirty years poor and white" she is saying her father is a black shoe, black is associated with evil, depression and plainly sad things. Also by referring to herself as white she is showing the difference between herself and her father using contrasting colours and perhaps is showing the difference between him being evil and her being good. There is a trend set In Daddy in which everyone Plath did not like is made black, her husband is referred to as "The Black Man" which is showing him to be just as nasty as her father. However in Twelve Songs black is representing depression not anger, "black cotton gloves" Auden is using black as a symbol for mourning, as well he is saying that now the person has died there is no colour or light and all that's left is darkness and despair. The poems both have different uses for the same colour, not just black but white as well. "Poor and White" is used in Plath's Daddy so that she can show that she is different from her father by using strong, bold, contrasting colours. But in Twelve Songs "white necks of the public doves" white is used to show the light and normality of the situation, not to make sure that Auden is not compared with his dead partner. ...read more.

In Daddy the intention is hard to find and there are quite a few different interpretations, at first it appears that Plath is angry at her father and just puts on a brave front to stop her from hurting so much. Plath's poems seem to be really confusing and hard to understand but why? In You're I think that Plath wrote down what she was feeling and to her what she wrote made perfect sense and didn't have a complicated "feel" to it. But Daddy seems to be made quite hard so that the reader has to read it a few times to understand it. Also it seems biased and plays Plath as a victim. Plath wrote Daddy as if she was a ten year old child, because the poem is written like a child it makes the readers feel sympathy towards Plath. Because its written like a child it means that it is hard for adults to understand it, to a child the colours and the description make sense, but to an adult its confusing because they change it so it has the meaning they want it to. To a child this poem could be nothing else but a poem about how Plath remembers her father but to us its about how his death affected her and the choices she made in life. ...read more.